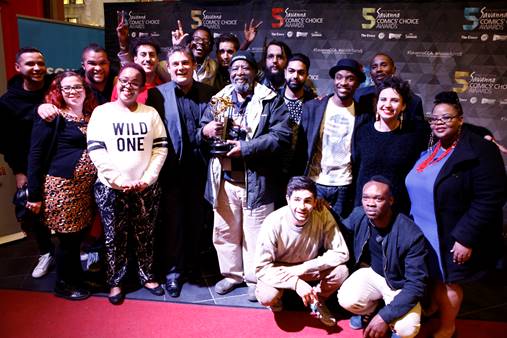 The press, registered comedians and other industry insiders gathered at stand-up institution, Parker’s Comedy Club at Montecasino today in anticipation of big news.

The announcement of the nominees for the nine categories in The 5th Annual Savanna Comics’ Choice Awards® causes huge buzz amongst comedians as the awards are so hard to win, and are bestowed by the comedians themselves on their peers.

Huddled over a lunch, entertained by some of the most exciting acts in SA comedy, attendees couldn’t wait to hear who had made the cut, and stand a chance to take home a coveted Waldo statuette at the main show on August 15th.

This year sees the introduction of three new awards to celebrate the 5th birthday of the awards, which are: The Non-English Award – recognising the fastest-growing segment of South African comedy; The Best Friend of Comedy – to thank those who work behind the scenes for their contribution to local comedy; and the Flying Solo – for the best one-person show of the year.

The Savanna Audience Choice Comic:
As always, this award allows the public a chance to have their say in who they think should take home a Waldo, and voting stays open until August 5th. If you want to win a VIP experience to the awards bash, vote now by SMS’ing your favourite comedian’s unique code to 45757.

You can vote 20 times (if you can’t choose just one favourite comedian!)

Congratulations to the one & only Joe Mafela on his Lifetime Achievement Award at the Comic's Choice Awards. #Legend pic.twitter.com/sAScUyHxyH

The Lifetime Achiever:
And of course, in what has become the traditional high-point of the Savanna Comics’ Choice Press Lunch, the recipient of the Lifetime Achiever was announced. Much loved and humble icon of the local comedy scene, Joe Mafela was glowing and eloquent as he acknowledged the industry he has served for decades. Mafela joins other local comedy legends, Mel Miller, Joe Parker, Barry Hilton and Mark Banks, who share this accolade.

In true CCA style, Mafela’s closest peers will ‘grill’ him at a special night at Parker’s Comedy Club on July 15th, a few weeks before the award ceremony. If you fancy seeing a panel of ‘grill masters’ honoring Mr. Mafela, book your tickets from the venue directly.

Limited tickets are available to the public, so book now through Computicket: online.computicket.com/web/event/savanna_comics_choice_awards/907680777/0/65161436

All seats are R280 and include access to the official after party.

Of course, all the best events need the best partners to support them, and the comedy industry thanks Mzansi Magic, The Times and Kaya FM 95.9 for helping to build comedy history. Special thanks also goes to Splitbeam for coming onboard to ensure that the event’s production is of outstanding quality and the highest standard.

Visit www.comicschoice.com to vote and for more information.