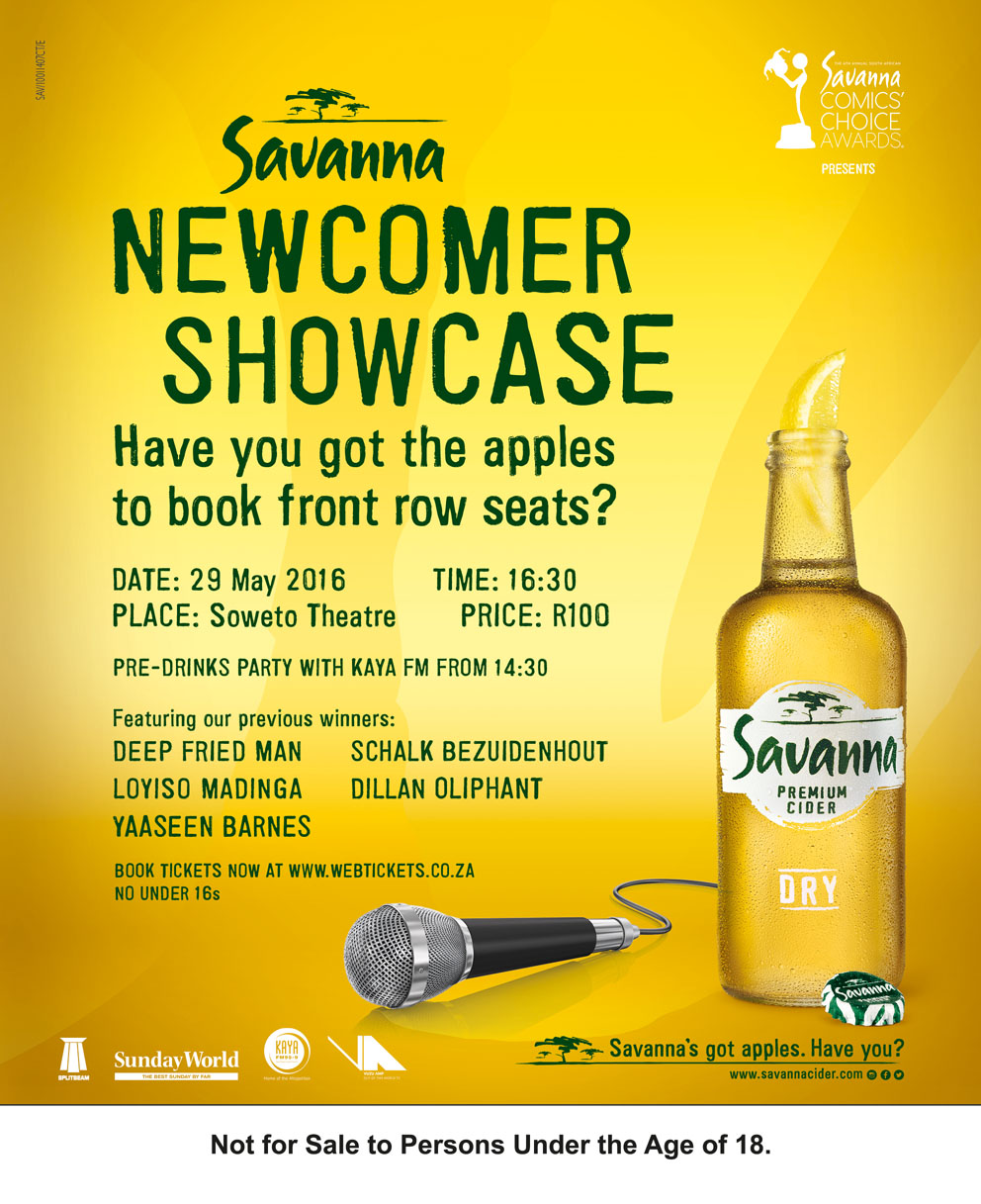 Savanna Premium Cider, an avid supporter of comedy bringing laughaholics a taste of the best medicine for the past 20 years, is a mainstay of South African stand-up and the development of new talent.

Since the launch of Savanna in 1996, comedy has been part of the brand’s DNA – not just through the left-of-centre characters in iconic TV commercials, but also by developing young comedians and supporting comedy festivals and shows throughout the country.

“There is no doubt that we South Africans all need to laugh more and Savanna certainly has the apples to make this happen!” says Tania Kotze, Savanna SA Marketing Manager.

Committed to discovering the nation’s stand-up heroes of tomorrow as hosts of the Savanna Newcomer Showcase held annually at the Soweto Theatre, Savanna gives 20 of the nation’s up-and-coming comedians a platform to kick start their careers. On Sunday, 29 May, these young comedians will have the opportunity to show that they are funny enough to be nominated for the Savanna Newcomer Award to be announced at the 6th Annual South African Savanna Comics’ Choice Awards® on 3 September at the Teatro at Montecasino.

“In the sharp-witted world of Savanna, with its signature take on intelligent humour, we are proud to be associated with the Newcomer Showcase – discovering new talent and helping young people forge their careers in comedy,” adds Kotze.

Past winners of this award, Yaaseen Barnes (2015), Loyiso Madinga (2014), Schalk Bezuidenhout (2013), Dillan Oliphant (2012) and Deep Fried Man (2011), will put in special appearances to bolster the new, as yet undiscovered stand-up comedians at the Savanna Newcomer Showcase. The aim of the event is to give these rookie comedians a platform to show what they are made of and to get members of the comedy industry to vote for them for the 2016 Savanna Newcomer Award.

In addition to playing its part in shaping the future of South African comedy by sponsoring the Newcomer Showcase and the Comics’ Choice Awards, Savanna is a keen supporter of popular comedy venues and has been responsible for bringing top international and African stars to South African audiences. Savanna also offers comedians the opportunity to showcase their talents in their unconventional television commercials.

In March this year, Savanna brought international comedy giant Kevin Hart to local fans on his first ever visit to South Africa as part of his record breaking international “What Now?” Tour. This followed shortly on the heels Savanna’s sponsorship of the Comedy Central International Comedy Festival where local kingpins of comedy shared the stage with some of Africa’s headline performers including Ugandan comedian Salvado and Nigerian superstar Basketmouth. American stand-up legend Jeff Ross and the country’s most famous American export, Trevor Noah, were also part of the festival.

Alongside these major sponsorships, comedy fans can join Savanna Premium Cider to support local stand-up acts at regular gigs at The Cape Town Comedy Club and Parker’s Comedy and Jive in Johannesburg.

The show starts at 16h30 but doors open at the Soweto Theatre at 14h30 for a pre-show shish nyama, banging house tunes from Kaya FM DJ’s and a complimentary Savanna Premium Cider on arrival. Tickets at R100 are on sale at WebTickets, Pick n Pay stores and Soweto Theatre.

More about the 6th Annual South African Savanna Comics’ Choice Awards®:
For the love of laughter

The 6th Annual South African Savanna Comics’ Choice Awards® will be held at the Teatro at Montecasino in Johannesburg on 3 September 2016. Voting starts on 9 May with the announcement of the nominees on 6 July. The show, directed by well-known comedian and TV director, Rob van Vuuren, promises to be a hilarious variety show comprising sketches, stand-up, impressionists, celebrity performances and witty one liners delivered by SA’s top comedians.

The 10 award categories are:
The Savanna Newcomer Comic
The Intermediate Comic
The Comics’ Pen Award
The Comic of the Year
The Lifetime Achiever Award
The Flying Solo Comic Award
The Non-English Comic Award
Best Friend of Comedy
The Breakthrough Award (new)
The Savanna Audience Choice Comic (only category open to public vote)