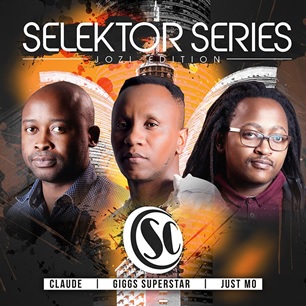 The second edition of the Selektor Series is officially available and this time the city of Johannesburg takes on the challenge! The Pretoria Edition did the city of Tshwane proud but now its time for the DJs of Jozi to exhibit their unique flavour. The 3­Disc album features the selections of three of the hottest South African DJs.

Claude:
The first of the Selektors from the Jozi Edition is the well­ established Claude. Boasting a long history with Soul Candi, his name is a familiar and trusted one. Known for his ‘Stereo Candi’ series and more recently his disc on Soul Candi Sessions 2014 (reaching Gold status, of course) there is no doubt that this will be another quality ­compiled album. This album promises a Soulful ­House sound featuring tracks from Andyboi, Punk and Chymamusique among several other stellar local and international artists.

Giggs Superstar:
Another well­e stablished artist and Household name is Giggs Superstar. His disc on Selektor Series sees his style of music shift to a more Tribal kind of house as opposed to the Deep ­Electro flavour the fans are accustomed to. Giggs has also featured on a previous Soul Candi Sessions album as well as the albums Deep House Chronicles and For The DJs. His disc on Selektor Series Jozi Edition will offer fans eight of his own productions including features from Zano, Tira, Duncan, Danger and King Soul ­just to name a few. Songs he has selected to be included on his disc includes Holly’s ‘Bang Bang’ and Punk’s ‘Deja Vu’ as well as a few other special tracks.

Just Mo:
This well­-known radio personality and club DJ is the third artist to have a disc on the Selektor Series Jozi Edition album. Best known for his Hot 99 Show on YFM, Just Mo also turned this into an album, namely The Hot 99 Dance mixed by Just Mo. His disc on the album focuses on Deep House, featuring remixes of some of the hottest tracks from artists like Lars Behrenroth, Jullian Gomes, Rancido and Johnny Miller. Just Mo’s disc is the perfect ending to a smoking album!

Pretoria vs Jozi … Which edition is your favourite?
Available: Musica and all digital platforms