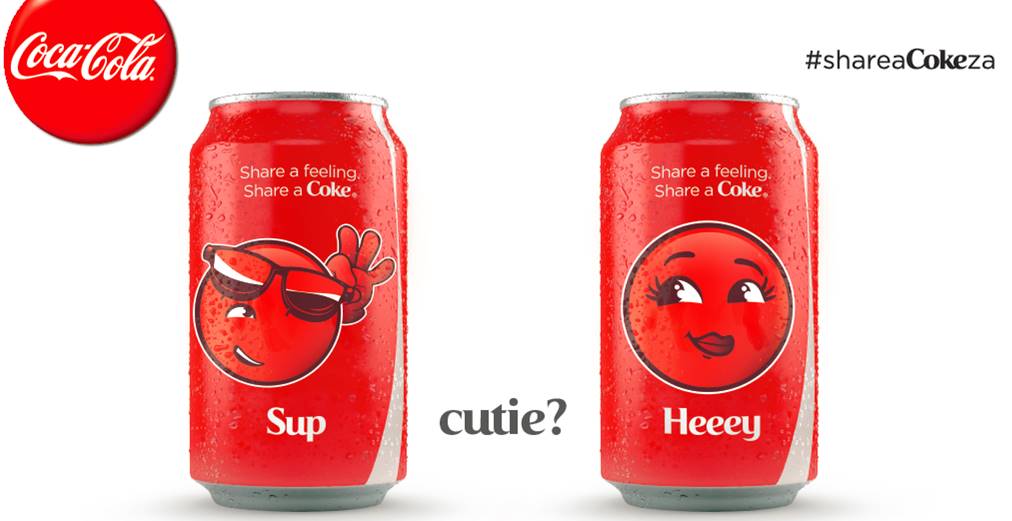 Feeling friendly? Say Aweh, Heeey, or Heita. In a flirty mood? Share some Smooches. Think someone’s Too Sexy? Let them know! Do it all with a can or bottle of Coke.

Coca-Cola is giving South Africans the opportunity to share how they’re feeling through the emojis on its new look packaging. The ‘Share a feeling. Share a Coke’ campaign lets you use emojis combined with phrases to express yourself. There are also lekker local ones like Kwakwakwa, Jol, Woohshem and Tjo Tjo Tjo!

Select emojis were chosen to champion the campaign because they help describe things, like feelings, that sometimes can’t be put into words.

According to Donnay Carter, Brand PR and Social Conversations Manager at Coca-Cola, “In South Africa visual communication is the new norm. The rise of the emoji is indicative of this rapidly evolving landscape.”

She continues, “Coke is all about sharing and expression; emojis are a cultural symbol of that, so why not bring the two together in a fun way?”

As well as being spotted on cans and bottles in stores across the country, the red Coca-Cola emojis were recently brought to life and have been seen popping up all over the place – cycling up and down Sandton Drive, shopping up a storm at Gateway Shopping Centre, supporting soccer at the FNB Stadium and taking in Cape Town’s sights atop a double-decker red bus. They even staged a flash mob!

By visiting www.shareacoke.co.za, uploading a photo and selecting a Coke emoji that shows how you feel, you could stand the chance of having your pic displayed on one of Coke’s digital billboards – now won’t that be Schweet! Share a feeling. Share a Coke!