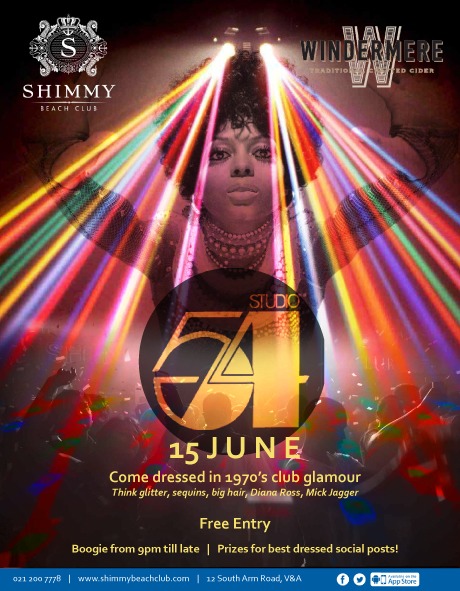 Shimmy Beach Club, voted Cape Town’s hottest club by Zomato, will host a Studio 54 themed party in the venue’s club on 15 June 2015, brought to you by Windermere Traditional Crafted Cider. Studio 54, frequented by film stars and celebrities in the 70’s, is considered to be the most famous club of all time. Michael Jackson, Rod Stewart, Andy Warhol, Mick Jagger, Liza Minnelli, Dolly Parton, Diana Rossand so many more were often seen entering and leaving its famous doors.

Visit Shimmy on 15 June to relive one of the most legendary nightclubs in the world – Shimmy is Cape Town’s favourite club and Studio 54 used to be New York’s best club! The wild success of the club is said to be Studio 54’s rule for a good party: Invite guests more interesting than you. The dress code was “Glamour only” and heightened the club’s signature experience. Opened in 1977 for just 33 months, it made US$7 million in its first year. Bianca Jagger rode a white horse through the club on her 30th birthday and owner Steve Rubell once gave Andy Warhol a bin full of money for his birthday.

Get your groove on this weekend at Shimmy Beach Club with Windermere Cider. Free entrance. Doors open at 9pm. #CapeTown #Studio54