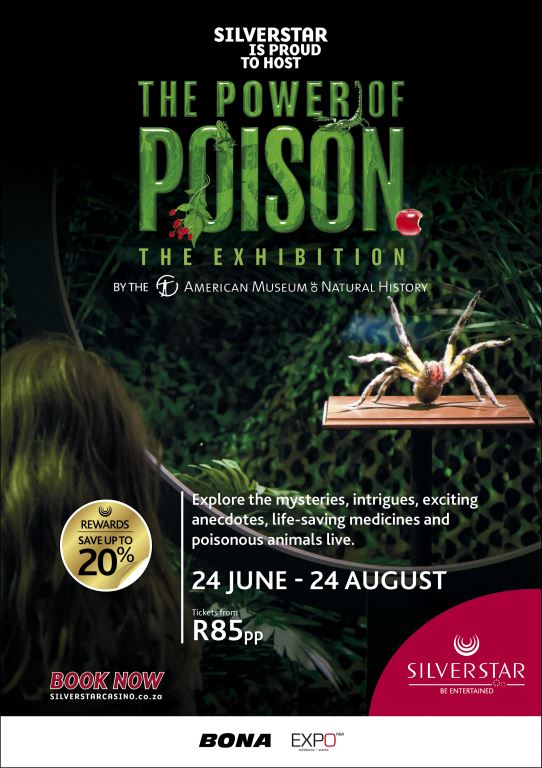 The incredible staging of the Terracotta Army, the necropolis and life of the First Emperor of China, has finally arrived at The Globe at Silverstar. This extraordinary voyage takes you through the Ancient China of 2,200 years ago and uncovers the mystery and secrets of that time. The more than 300 life-size reproductions of statues, chariots, weapons and objects from the daily life of the First Emperor of China, as discovered in the more than 100 pits of the necropolis, completes this exhibition and gives it a life of its own.

Tickets for this event are available through www.silverstarcasino.co.za.

Join Silverstar and the American Museum of Natural History as they bring you The Power of Poison, The Exhibition. Discover all you need to know about the enchanting history of poison – from the cures it has produced to the myths it has created. All of this can now be discovered in over 200 exhibits, including incredible presentations, demonstrations and performances. This event, offering fun for the entire family, is taking place at The Globe at Silverstar. Make sure to get yourself there and take a guided tour while you explore the role played by poison in shaping human history, healthcare and literature. Also discover the light-hearted side of poison as you voyage through the recreation of Snow White’s fairy-tale and the witch’s poisonous apple.

Tickets for this event are available at www.silverstarcasino.co.za.

Get yourself and your other half to Silverstar for a Night Out for 2 for just R300. Night Out for 2 vouchers act as your passport to great value for money as well as a fun-filled evening and include – meals, movies, drinks, casino Free Play, bowling, laser tag and much, much more. Offer valid until the end of 29 September 2016. Get your Night Out for 2 package at the Silverstar Box Office (opposite Twinkle Club)

Silverstar brings you the latest blockbusters at half the price any day, any time this July. With the biggest movie screens, catch movies such as Tarzan, Finding Dory and Ice Age at only R19 a head. This offer is for a limited time only, ending on the 31st of July. However, if you sign up to the Silverstar Rewards programme, you can continue enjoying discounted levels of up to 80% for black card holders, 70% for platinum card holders and 65% for gold card holders.

So make it a family affair and hop on over to the number one entertainment destination in the West Rand.