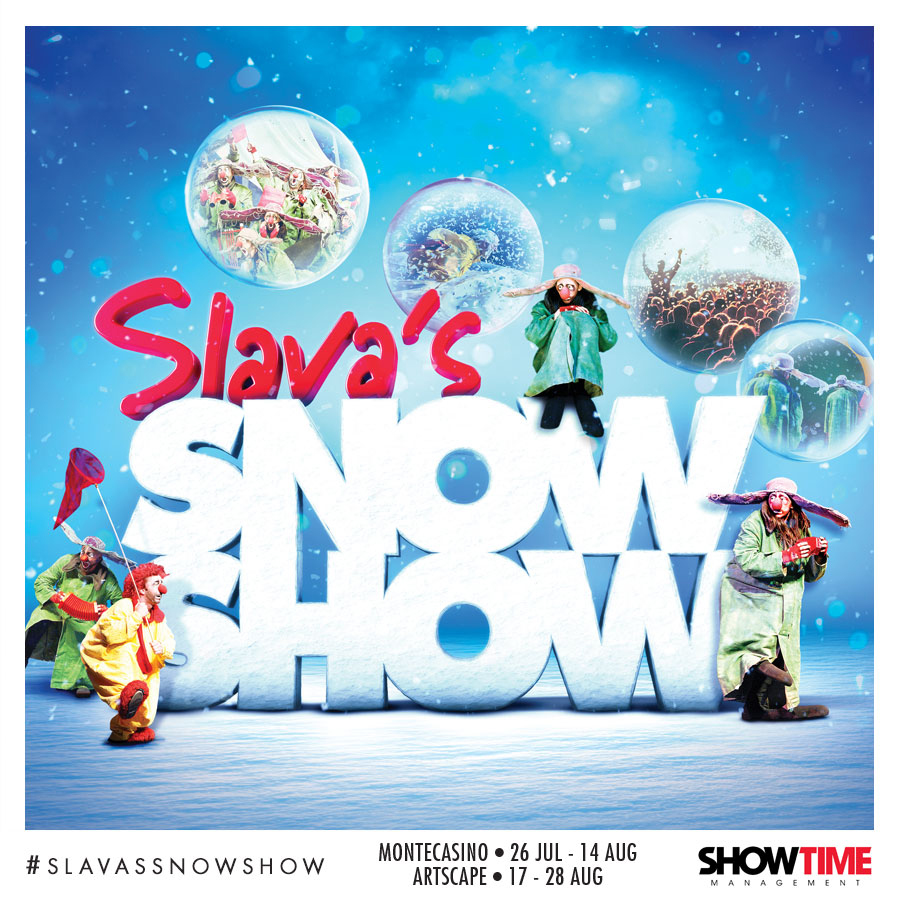 When the critically acclaimed international stage sensation, Slava’s Snowshow opens in South Africa for the first time, at Montecasino’s Teatro on Tuesday 26 July, a very special guest is expected to be in the audience. That guest is none other than this show’s creator, Russian Master Clown legend, Slava Polunin!

Praised as one of the most illustrious clowns in the world and famous for his yellow clown character, Assissai, Slava is an icon of Russian culture. Slava is more than an actor and director of theatre, he is also an artistic director and the producer of full-scale, epic size events and festivals, who is constantly gathering and uniting hundreds of artists, across disciplines, to jointly create massive, collective happenings and celebrations. From early 2013 until recently Slava was also the artistic director of the oldest and biggest circus in Russia – The Bolshoi St-Petersburg Circus. Slava is still involved with this circus but in a less demanding and more passive role.

Following his sensational performance as part of Cirque du Soleil’s “Alegria”, Slava went on to create the Snowshow in the early ‘90’s and since it opened more than 20 years ago, Snowshow has never stopped touring, playing to millions of people across the globe. “Our show is not only different year from year – in fact, it is different every time, because it allows lots of room for improvisation and the show remains full of life,” says Slava. The show and its creator have been presented with 20 of the world’s most prestigious theatrical awards, including the Lawrence Olivier, Drama Desk, Triumph and Golden Nose awards.

When asked what can be expected from The Snowshow, Slava says “In the first place one should expect a journey into your childhood, sparkling with your dreams, into mine – covered by the snowy blanket, into ours – filled with anticipation and dreams. A trip into the world of bright colours, true feelings and important small details, details that one only notices when young. In any case, each person sees his or her own story in the show, his own world. This is very important to me.” Slava goes on to explain that the most magical aspect of this show is the intimate communication with the audience, which in this case is non-verbal, elusive fibres of contact which often appear between an artist and spectator during the show. This very subtle interaction creates the magic of theatre.

Slava’s Snowshow has a special edge for each country’s audience. For instance its absurd side comes in handy in the UK while the passionate side becomes more prominent in Spain. Its wide and filled soul is summoned up in Russia and its poetic side starts to sound clearer in France. It’s going to be interesting to see the spontaneous responses by local audiences at Montecasino’s Teatro from 26 July 2016 until 14 August 2016 and then at the Artscape Opera House, Cape Town from 17 to 28 August 2016. Tickets are on sale now at Computicket.

“Slava no longer performs in the show and he seldom travels with The Snowshow so we feel privileged that this iconic entertainer is joining us to watch the opening performances in Johannesburg,” says local promoter, Tony Feldman of Showtime Management. “We look forward to welcoming Slava and The Snowshow to South Africa for the first time and to introduce them to our audiences and likewise our audiences to them.”

Slava lives in France, in a 12th century mill house along the banks of the River Marne not far from EuroDisney, Paris. His fantasy home, called Le Moulin Jaune is an explosion of the imaginative, the inventive and the surreal. Constantly swarming with intense creative activity and busily defying reality, everything at Moulin Jaune is an interactive dialogue between art and nature and it is a wonderful reflection of his stage performance. “Beware, dreams come true”, warns the sign at the door. It is within this playful environment, mixing garden and theatre where foolish encounters and experiments of all types (workshops, festivals, rehearsals and contemplative activities) give birth to even more foolish projects.

This unusual homestead includes a (Tchaikovsky’s) Nutcracker Suite themed guest room, where all the furniture and fittings are seen through the eyes of a child in an adult world. More rooms, more doors – another dream. There’s an Arabian Nights styled room; a simplistic bridal suite; another room in which everything is in pale blue and white; a Grandma’s room decorated with lacework and old framed photographs everywhere. The Economist (2014) called it “an eye-popping affair, something sprung from the combined imagination of Lewis Carroll and Salvador Dalí.” There’s nothing quite like the Moulin Jaune, but there again, there’s no one quite like Slava.

Inspired by Monty Python, Fellini and Charlie Chaplin, Slava believes “expression without words is much more organic and natural than using words on stage; visual language is much richer, more personalized and elusive. The fact that we do not use spoken words in our performances is just one of the reasons why Snowshow has been touring the world so successfully.” This highly acclaimed international visual tragi-comedy clown masterpiece for children and adults over the age of 8 years, lovers and joy seekers is easily understood by all round the world.

Slava’s team of Snowshow clowns are coming to SA to entertain, to amaze and to bring a sense of wonder … of magic … of joy as they transform the venue into a virtual playground. Are you ready to be blown away? Book now at Computicket by calling 0861 915 8000, visit www.computicket.com or your nearest Computicket service centre. For more information, visit or www.montecasino.com or www.slavasnowshow.com For special Montecasino Group Hospitality Packages for groups of 20 persons and more please contact montecasino.reservations@tsogosun.com or telephone 011 367 4250 and stay current on the latest news through social media on Facebook Twitter and YouTube.

Group Bookings
20% Discount on groups of 20 and more – midweek performances only
Bookings through Jill Somers, 079 218 1658, sales@showtime.co.za