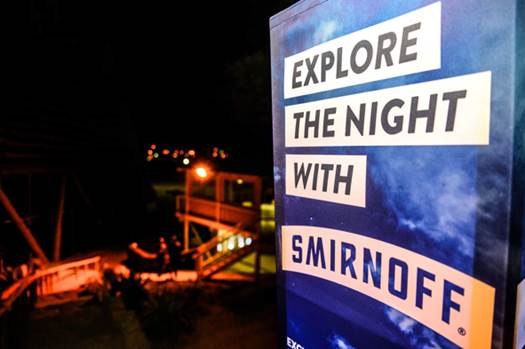 Jozi has another chance to ‘Explore The Night’ with Smirnoff – today Friday, 13 November.

Party-goers will experience two major local music acts at each of the three venues, using the stylish free Smirnoff Cab Service to get between venues and catch the entire line-up. All you’ll need to do is purchase a can of new Smirnoff Double Black Ice Green Coffee to get your wrist band, which entitles you to a cab ride to the next venue, as well as free entrance.

The journey kicks off with DJ Milkshake and Kid X at The Sands, followed by DJ Dimplez and Major League DJz at Taboo and Twins on Decks and DJ C-Live at VIP Room.

This is the second Explore The Night event. Smirnoff owned the nightlife in Soweto on the 30th of October, when Sphectacula and DJ Shimza raised the roof at Chaf Pozi; Ricky Rick and Major League fired up Zone 6; and Kid X and DJ Vigilante kept the party going at Dobson Point – Disoufeng.

Don’t miss the ultimate night time adventure with Smirnoff today, 13 November from 20:00 to 01:00 at The Sands, Taboo, and VIP Room.

For more information on the Explore The Night experiences, follow SmirnoffSA on Facebook. Explore the Night hits Durban on 27 November and Cape Town on 4 December.

Explore The Night with Smirnoff Double Black Ice Green Coffee. Smirnoff. Not for Sale to Persons under the Age of 18. Enjoy Responsibly.