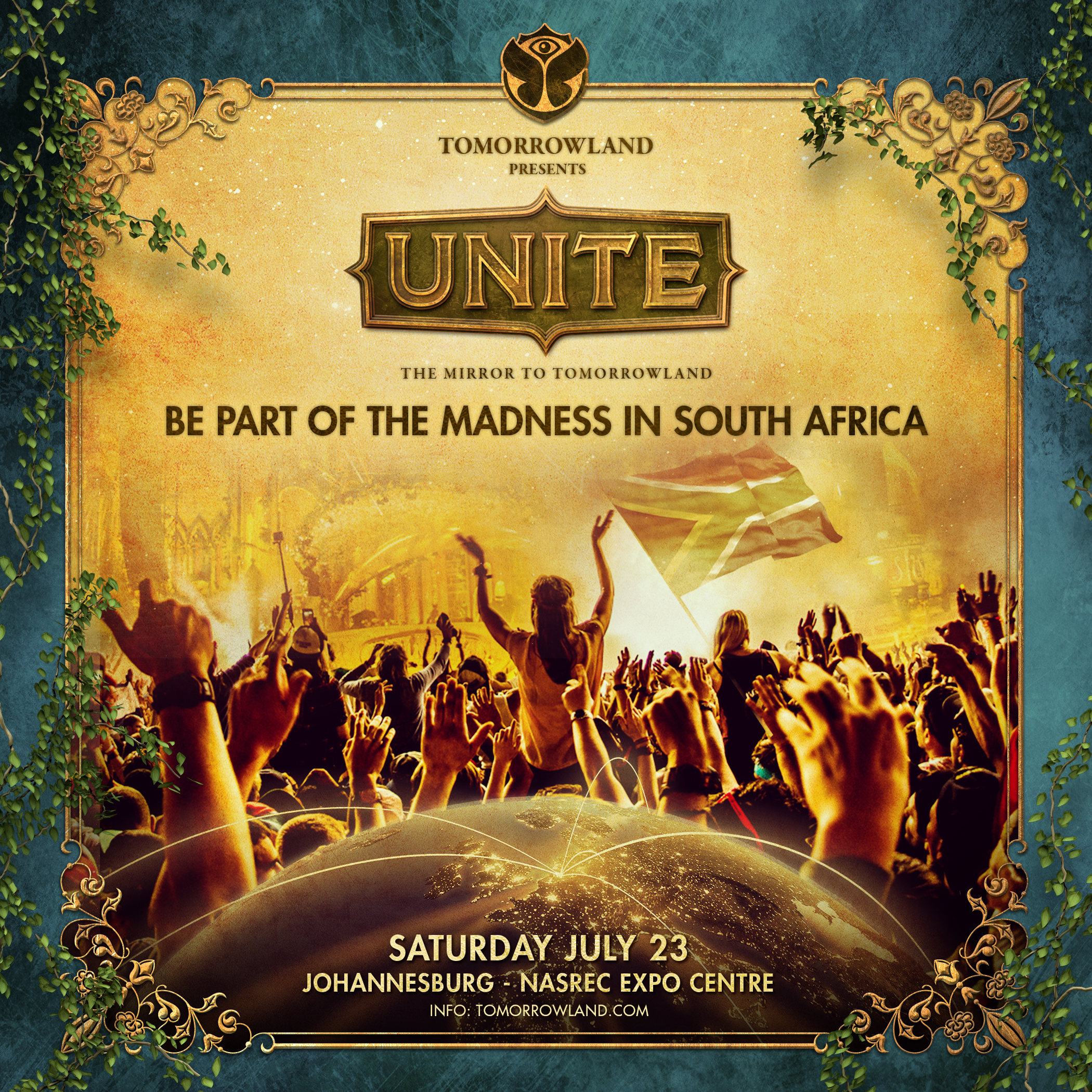 On Saturday 23 July South Africa will, for the first time ever, be able to experience the Magic of Tomorrowland when Tomorrowland UNITE, the mirror to Tomorrowland, comes to Nasrec Expo Centre, Johannesburg.

Proudly brought to you by Massive Management, prepare to experience the magic of Tomorrowland, with the same world-class theatrical production that has made the festival famous, and with a live screening of the headlining acts. Information on the full line-up (local and international) and tickets will be announced on Monday 16 May.

With a healthy dose of Tomorrowland magic, this indoor event will be a chance to experience the festival first-hand, from the other side of the world, along with local DJ talent and plenty of showmanship and fireworks.

On Saturday 23 July, a live video connection will be made from Boom in Belgium to 7 other countries, including South Africa and… back again. On 4 different continents, tens of thousands of guests will be able to experience “UNITE” as one.

Under the title UNITE, the mirror to Tomorrowland, 7 amazing parties will be held in 7 different countries: South Africa, Mexico, Colombia, Germany, Israel, Japan and India which will be directly connected, literally, with the festival in Belgium. UNITE will be bringing Love, Unity, Madness and Magic to 7 stadiums, tens of thousands of kilometres across the globe from Boom.

“It feels great to perform at Tomorrowland but the feeling that also ten thousands of people are also partying in 7 other countries is incredible. We think UNITE can definitely bring a part of Belgium to South Africa!” says the celebrated DJ duo Dimitri Vegas & Like Mike.

Now in it’s 12th year, Tomorrowland has called De Schorre, Belgium, its home, and recently extended itself to countries such as the USA and Brasil. All three of these festivals sell out at lightning speed meaning that a lot of People of Tomorrow get left out each time, but that is now a thing of the past.

UNITE, experiencing Tomorrowland from 10,000 km away, is Tomorrowland’s way of making the world a little bit smaller, so that people can come together for one memorable musical weekend.

This press release in a tweet:
Tomorrowland UNITE, the Mirror to @Tomorrowland, is officially coming to SA on 23/07 in Jozi. Be part of the Madness! #TomorrowlandUniteSA

UNITE in a few words:
Raise a toast, with a cold glass of Belgium beer, of course – to the friendship between a Russian and an Australian, dance with Mexicans and Cubans, wave that Swedish or Norwegian flag and enjoy French croissants with your Israel neighbours… Tomorrowland is the biggest international festival on the planet. Literally the whole world comes together once a year at De Schorre, with more nationalities participating in Tomorrowland than the Olympic Games.

Last year, the personal message from Ban Ki-moon, Secretary-General of the United Nations, was engraved for posterity on a piece of wood that will soon be added to the permanent bridge One World by People of Tomorrow at the recreational domain De Schorre in Boom, and this summer, more bridges will be built again

Building bridges between Belgium and the rest of the world, with plenty of music by the world’s best DJs and the unique, indescribable Tomorrowland atmosphere: this is UNITE, the mirror to Tomorrowland – a planet in a parallel universe that defies space and time, a global happening; a dream world where all visitors recognize themselves in a soft-edged fantasy world.

Unity
A positive way to bring the entire world together: that’s what Tomorrowland has been doing for over 12 years at De Schorre in Belgium, and now on two other continents with TomorrowWorld USA and Tomorrowland Brasil. All three of these festivals sell out at lightning speed meaning that a lot of People of Tomorrow get left out each time. That’s why, during the 12th edition of Tomorrowland, on Saturday 23 July, there will be a satellite link set up from Boom (Belgium) to 7 other countries including South Africa.

Magic
In Japan, you can party until the break of dawn, while the Colombians will be just finishing lunch. From Belgium, from 8:30 PM (CET) until midnight, there will be a live satellite link so that the People of Tomorrow will be able to experience the live-sets of our International acts, along with the best in local talent – to be announced on Monday 16 May.

1 thought on “South Africa to Taste the Magic of Tomorrowland, “Tomorrowland UNITE””