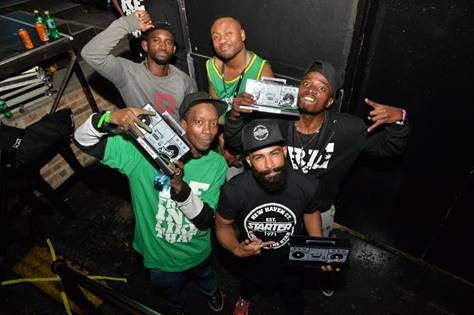 If you weren’t at the Sprite Uncontainable Talent Search finale on the 29th of August 2015 at Zone 6 in Soweto, then you missed out on a Hip-Hop celebration like no other.

The festivities kicked off with banging beats being dropped by DJ Radix, followed by Kaygo’s masterful mix on the ones and twos and MR X’s live remixes of popular tracks.

With the energy of the crowd having been pushed to its peak, it was time to enjoy the emcee and dance battles which enabled those who had not officially entered the competition to show off their skills and win prizes.

After special sets by Sampling Through the Ages and Lolli, last year’s winner in the emcee category, the competition rounds got underway.

First up the graffiti artists put their spray painting skills to test, with judge Mars on the lookout for technical skill, diversity, originality and feeling. Then the emcees got to spit their rhymes for award-winning rapper and judge Reason, who kept his eyes open for a superstar that’s ready to shine. Next, the dancers, ranging from b-boys to krump kings, got to strut their stuff for judge Simba who was after real talent, skill and ability to entertain the audience.

The suspense of finding out which of the 14 finalists would win the potentially life-changing opportunity of being mentored by the judge in their particular genre was temporarily forgotten with an epic performance by DJ Capital while the judges made their decision.

Finally the names of the winners were revealed with Lungelo Ntuli aka Da Zeeology winning in the emcee category, Brandon Petersen in the dance category and Mduduzi Tshabala in the graffiti category.

With the nerves of the finalists and audience out of the way, Revivolution turned the energy up with an insane set. Then, Reason, with his judging duties now done and dusted, took to the stage with his flow on fleek. Next up, winner of three SAMA awards, KO treated the audience to a few of his signature tunes.

Undoubtedly a high point of the night was the eagerly awaited performance by international headline international Hip-Hop act Mobb Deep. The duo rocked the crowd with tracks off their latest album ‘Survival of The Fittest‘ along with a few other classics.

The party continued into the early hours of the next morning with DJ Vigi on the decks.

On top of a line-up of Hip-Hop super stars, the finale had something special for everyone. There was a nail bar where the ladies got to have their nails done in graffiti, neon and retro styles while the guys played arcade games in the chill zone. Funky photos were taken in the Silver Screen Photo Booth where guests got the chance to turn themselves into a Hip-Hop inspired character and pose with larger than life props. In the Tag Station, aspiring graffiti artists got the chance to channel their creativity by customising caps and headphones. At the Sneaker Exchange, guests got to swop their old pair of sneakers for new ones and even have their shoes customised and cleaned.

The finale was an unforgettable experience not only for the winners but the attendees who got to enjoy a Hip-Hop packed evening.

About The Coca-Cola Company

The Coca-Cola Company (NYSE: KO) is the world’s largest beverage company, refreshing consumers with more than 500 sparkling and still brands. Led by Coca-Cola®, one of the world’s most valuable and recognizable brands, our Company’s portfolio features 20 billion-dollar brands including Diet Coke®, Fanta®, Sprite®, Coca-Cola Zero®, vitaminwater, Powerade, Minute Maid, Simply, Georgia and Del Valle. Globally, we are the No. 1 provider of sparkling beverages, ready-to-drink coffees, and juices and juice drinks.