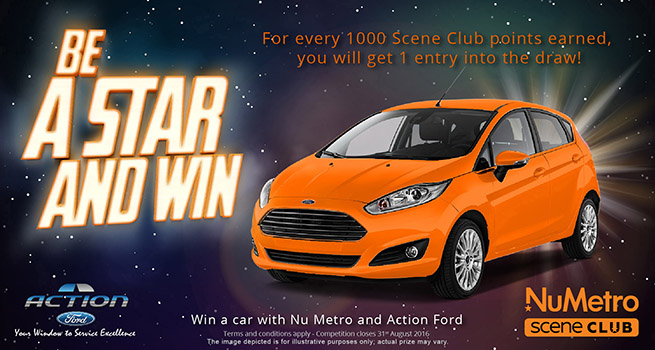 Nu Metro Cinemas has launched an exciting competition to reward new and existing Scene Club-members. Action Ford has partnered with Nu Metro Scene Club, where one lucky winner will walk away with a brand new Ford Fiesta 1lt Ecoboost Titanium. This exciting prize also includes road costs, a service plan with a 3 year/60 000km warranty and 120 000km’s worth of free road side assistance!

Scene Club is Nu Metro’s popular loyalty programme, launched with great success at the end of 2015. To Win A Car with Nu Metro Scene Club – new and existing members only have to swipe their club cards for purchases in cinema (movie tickets and catering). Each member will receive a competition entry for every 1000 points earned. The competition is active until 31 August 2016.

“The objective of Scene Club is to enhance the cinema-going experience at Nu Metro Cinemas – rewarding loyal customers, making customers feel part of the ‘scene’ when they visit our cinemas, adding excitement to their cinema experience and thereby establishing a loyal customer relationship. In partnership with Action Ford, we are now pleased to reward all members even further, by giving them an opportunity to drive a fantastic high-value prize. This is our Thank You to our Nu Metro-fans – proving that we do care about everyone who celebrates their love of going to the movies with us,“says Nitesh Matai, Nu Metro Cinemas – GM (General Manager).

Joining Scene Club is FREE of charge at any Nu Metro cinema nationally. Club members each receive their own personalised member card, with 10 points earned for every R1 spent on movie tickets or catering/snacks. 2000 points are added once new members accumulate 1000 points. Once a member’s points-balance reaches 3000, they can start using points to redeem discounts on movie tickets or catering. Double points are earned on all purchases every Tuesday, as well as when promotional combos are purchased.

“People are returning to cinemas en masse. Our new loyalty programme, Scene Club, has been greeted enthusiastically. This points-based reward system aims to improve our interaction with our most loyal supporters, and segment communications to speak to each of our fans’ needs, interests and film preferences when it comes to visiting one of our cinemas. Scene Club is a way for us to understand our audience better, and offer a more effective service, even after the movie credits have rolled,” concludes Nu Metro GM, Nitesh Matai.

**To join Nu Metro Scene Club and start earning points to be entered into the competition (1000 points = 1 entry), click here.