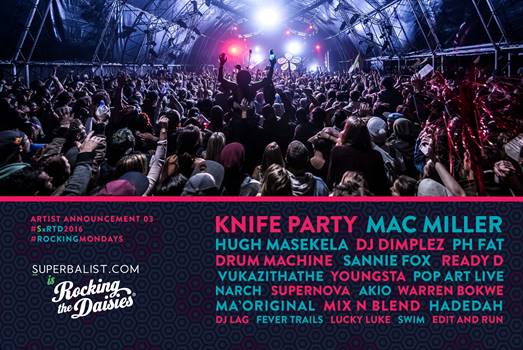 And #RockingMonday is also proud to announce the South African legend that is Hugh Masekela and more.

Globally renowned electronic dance music duo Knife Party, formed from two members of the drum and bass outfit Pendulum, Rob Swire and Gareth McGrillen, are notorious for their aggressive take on electro-house/dubstep. Knife Party have sky-rocketed to become one of the most renowned dance acts on the planet with barely a moment to catch their breath.

The group’s first EP ‘100% No Modern Talking’ racked up over half a million downloads. They have amassed over 2.3 million Facebook fans, achieved over 20 million plays of their son ‘Internet Friends’ on YouTube alone, and have headlined shows and festivals to tens of thousands of fans the world over. Remixing Porter Robinson, Labrinth and Nero to name a few, Knife Party also collaborated with Swedish House Mafia on the phenomenal worldwide smash ‘Antidote’.

The Knife Party movement is both a viral and a global one, and fresh from headlining Ultra Miami in 2016 we welcome them as the Electronic Dome headliner. An act that is sure to literally blow the roof off!

Mac Miller, is an acclaimed American rapper and producer from Pittsburgh, Pennsylvania. Since releasing his first mixtape at just 15 years old, he came on the scene with a throwback style that betrayed his years and has become one of the leaders of the new school, that is taking the global hip-hop scene by storm. In early 2010, Miller signed a record deal with Pittsburgh-based indie record label Rostrum Records.

He subsequently began recording his debut studio album Blue Slide Park, and released it on November 8, 2011. The album went on to debut at number one on the US Billboard 200 chart, making it the first independently distributed debut album to top the chart since Tha Dogg Pound’s 1995 album, Dogg Food.

Since then, his coming of age has reflected on his sound which has evolved from what critics call ‘party rap’ to an adaptive free-associative rhyming style. Where Mac Miller is not just a rapper anymore, but an eclectic artist who can easily adapt to different genres and can also craft, both for himself and for other artists.

South African music legend Hugh Masekela, Bra Hugh to us, is world-renowned and will give this week’s #RockingMondays young guns inspiration for days.

South African hip-hop greats DJ Dimplez, Ready D, Youngsta and PH Fat are bound to set the Two’s Up stage ablaze. Known for their charismatic and wildly revered performances nationwide, their Daisies’ sets will be one to remember.

Calling all planet changers, eco lovers and generally everyone who wants to be a part of making a real difference – it’s your turn!

Staying true to our ethos as being South Africa’s premier eco festival, Superbalist is Rocking the Daisies is serious about greening and lowering our carbon footprint by literally Walking the Daisies.

The two-day walk from Cape Town on Wednesday 5th to the opening of the festival in Darling on Thursday 6th October sees two hundred and fifty like-minded festival goers walking to affect positive change through environmental action.

Overnight camping, catering and beach clean-ups are organised with the educational focus on sustainability, ecology and feedback systems. Could there be anything more magical than camping under the stars, waking up to spring sunrises with that unmissable tingling feel-good feeling of knowing you’ve played your part? Walking the Daises provides walkers with a real, immersive South African experience which starts a process that has the potential to create real value.

In the tone of encouraging like-minded festival-goers to reduce their carbon footprint, saving the environment one pedal at a time. This ride will set off from Cape Town City on Friday morning (the 6th of October) and arrives at Superbalist is Rocking the Daisies later that same day, and then IT’S ON!

If you haven’t yet sorted out your accommodation requirements: Go check out http://rockingthedaisies.com/info/camping-and-accommodation/ to find your perfect casa in the Republic of Daisyland.

Rocking the Daisies takes place from 6-9 October 2016 at the beautiful Cloof Wine Estate in Darling in the Western Cape.

If you can’t get there, you’ll have the chance to see some of the international acts perform in Jo’burg at the Superbalist In the City Weekend. Check out www.inthecityjhb.co.za for all info.

Phase 3 Tickets Re Now on Sale to the Public:
Tickets are now on sale to the general public, NO RESERVATIONS needed! Head on over and buy your ticket here: http://steynentertainment.nutickets.co.za/RTDReserve

Each ticket must be assigned to an individual person; multiple tickets cannot be purchased under one name, so make sure that you get your friend’s cellphone number and email address if you’ll be buying for them.