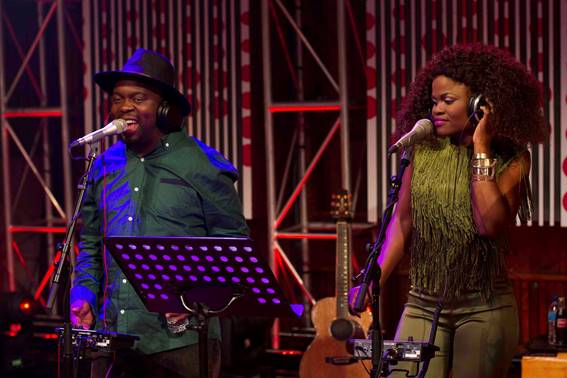 With 13 episodes of Coke Studio down, some of the best music is still to come. Two stars on the SA music scene – R&B legend, Kabomo and House diva, Mpumi – have teamed up to create another unique fusion track on Coke Studio.

Coke Studio is music platform that gives both established and up-and-coming artists from different genres and backgrounds just three days to fuse their styles and come up with a unique song. The entire process is caught on camera giving audiences a “fly-on-the-wall” look into the music-making process. Viewers can watch the artists in action, witness all the behind-the-scenes drama and finally hear the artists perform their fusion track for the first time.

Both artists were blown away at being selected to take part in Coke Studio. Mpumi says, “Coke Studio could have picked any other artist but they chose me. The fact that they noticed my work and trusted me to deliver on such a major platform is truly humbling.”

Kabomo and Mpumi had always wanted to work together, but with their busy schedules, the timing was never right. “Partnering enables artists to bring a unique energy to a song. I have always admired Mpumi and it was a privilege to finally have the chance to work with her,” shares Kabomo.

On their first day in studio, Mpumi and Kabomo wasted no time and got busy making music. The producer, Mpho Pholo, who is known as 37mph, started playing a few chords and the artists started humming to it. Suddenly they had to come up with a chorus which formed the backbone of their track.

In just four hours they had completed their song, titled ‘Thando,’ but because they so enjoyed making music together, they came back the next day to create a second song, ‘Simple Things’. The chemistry was electric and they fed off each other’s positive vibes making the fusion process effortless. They also realised that this was a rare opportunity to work together and really made the most of it.

The artists explain that the fusion track ‘Thando’ is about love as well as accepting and appreciating one’s partner – flaws and all. The second track, ‘Simple Things’, is a celebration of gratitude for things like family, friends and freedom that although taken for granted, make life worth living. As the themes of each song are different, so too are their sounds. ‘Thando’ leans more towards R&B, while ‘Simple Things’ is more House orientated.

On fusing their different genres, Mpumi and Kabomo say it wasn’t always so fluid and simple. Kabomo had some difficulty laying down his verses on the House music inspired track, in fact, “It gave me a grey hair or two,” jokes Kabomo.

Neither artist had been filmed whilst writing songs or recording music before. It was a new experience which they quickly became used to as they were consumed by the beautiful music they were making.

When asked what the best parts of his Coke Studio experience were, the R&B star said that he loved listening to their songs for the first time and the feeling of support they got from the Coke Studio crew. For Mpumi it was the actual recording of the ‘final reveal’ performance with the live band.

The artists cannot wait to share their songs with the public.

“Coke Studio is a celebration of the country’s talent and I feel enormous pride to have been a part of it,” says Kabomo.

Tune into e.tv on Monday night at 8:30pm to catch Mpumi and Kabomo’s fusion story on Coke Studio.