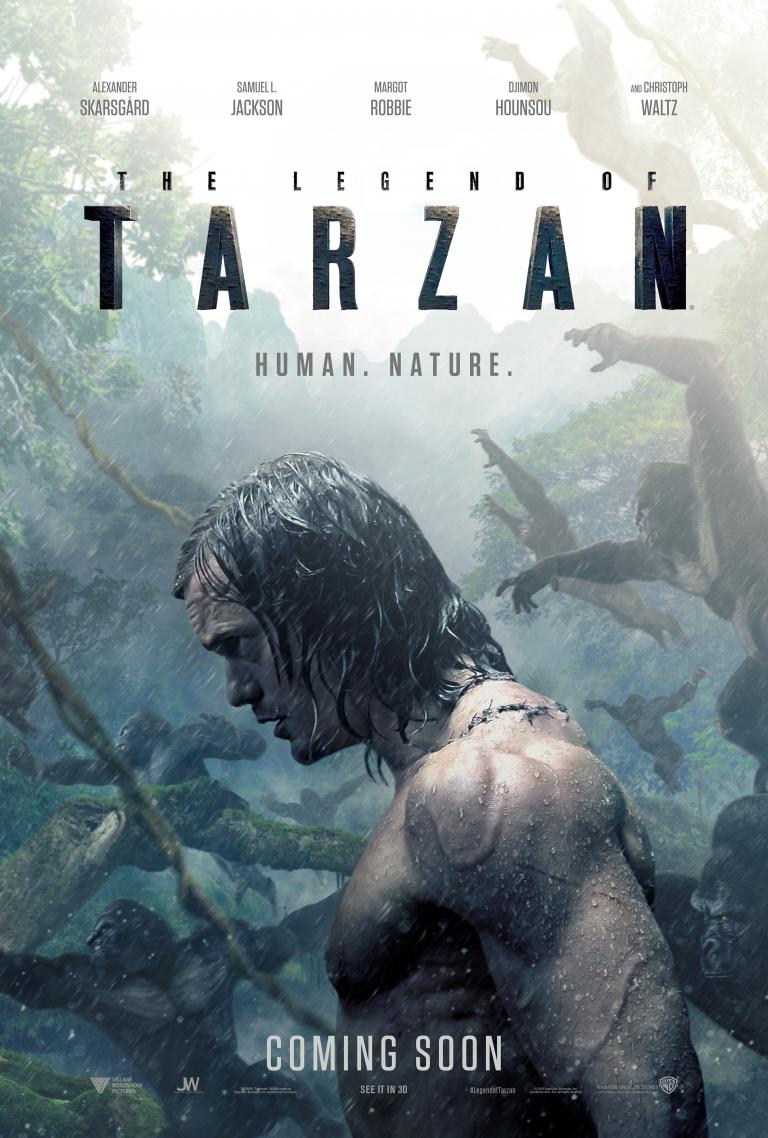 The Legend Of Tarzan is sitting at the top of the South African box office, after a triumphant opening at cinemas this past weekend. The film is the latest blockbuster to be screened in the multi-sensory 4DX format, exclusive to Nu Metro V&A Waterfront (Cape Town) and The Pavilion (Durban). And it is also showing in full immersive-style in Scene Xtreme, exclusive to Nu Metro Menlyn Park (Pretoria), Clearwater (Johannesburg) and The Glen (Johannesburg).

The shows for The Legend Of Tarzan in Scene Xtreme at Nu Metro Menlyn Park, The Glen (Jhb) and Clearwater Mall (Jhb) feature next generation, digital 3D projection on a large-format screen, and enhanced through RealD’s Precision White Screen-technology; delivering a much sharper, brighter and more realistic image compared to other standard 3D cinema screens.

Another aspect of the Scene Xtreme experience is the latest in sound technology. Scene Xtreme at Nu Metro Clearwater Mall is the only cinema in Gauteng with Dolby ATMOS sound – delivering all-around surround sound via the most advanced cinema sound system available. ATMOS soundtracks condense multiple levels of audio, processed with precision through overhead speakers and crystal clear reproduction – sounds can literally be moved around in 3D space.

Menlyn and The Glen Xtreme boast specialised Auro 11.1 audio systems, including the much talked-about “voice of God” sound channels hovering above cinemagoers – delivering powerful, superior sound from all angles, including overhead audio channels. The Legend Of Tarzan is showing with a specialised Barco Auro-soundtrack at these two Scene Xtreme-cinemas – the only two cinemas in South Africa featuring this next generation-audio system for advanced experiences in cinema.

The Legend Of Tarzan is a spectacular, action-packed, big screen-version of the popular story. It has been years since the man once known as Tarzan left the jungles of Africa behind for a gentrified life as John Clayton III, Lord Greystoke – with his beloved wife, Jane, at his side. Now, he has been invited back to the Congo to serve as a trade emissary of Parliament, unaware that he is a pawn in a deadly convergence of greed and revenge, masterminded by the Belgian, Captain Leon Rom. But those behind the murderous plot have no idea what they are about to unleash.

The Legend Of Tarzan takes the story of the iconic hero to new heights, and stars acclaimed acting talent such as Alexander Skarsgård, Samuel L. Jackson, Margot Robbie, Djimon Hounsou and Christoph Waltz. Tarzan’s onscreen adventures see him go above and beyond to save his former home, and are guaranteed to inspire goosebumps with astounding special effects and striking camerawork. It is filled with excitement, a few surprises, tons of action and adventure – to keep new and old fans glued to the screen.

The Legend Of Tarzan is now showing in all Nu Metro’s cinemas nationwide – including 4DX, 3D, 2D, Scene Xtreme and Scene VIP.

**Premium pricing applies to both 4DX and Scene Xtreme; loyalty discounts are not applicable. Standard pricing and discounts apply to normal 3D and 2D cinemas for the film’s general release from Friday.
**Please note that 4DX is not open to young children and pregnant women. Those suffering from neck or back problems, epilepsy or other forms of similar ailments or illnesses are advised against partaking in the 4DX cinema experience. Clear disclaimers and warning signs in this regard are posted at all 4DX cinema entrances.

About 4DX by CJ 4DPLEX
CJ 4DPLEX is operating 4DX, the world’s first 4D-technology based cinema for feature films. Headquartered in Seoul and with international offices in Los Angeles and Beijing, the company provides immersive cinematic experiences through 4DX auditoriums for exhibition partners along with 4DX codes of major Hollywood blockbusters and local titles. Each auditorium incorporates motion-based seating synchronized with over 20 different effects and optimized by a team of skilled editors, maximizing the feeling of immersion within the movie. A visit to the 4DX brings a virtual journey through an all-encompassing experience not limited to just audio and video. 4DX presents an all-five-senses immersive cinematic experience allowing everyone to connect with the movie and experience special effects through motion, vibration, water, wind, lighting, scents and more that enhance the visuals on-screen. Since 2010, more than 200 Hollywood titles were screened in 4DX. As of June 2015, there are more than 24,000 4DX seats across 182 sites in 34 countries.