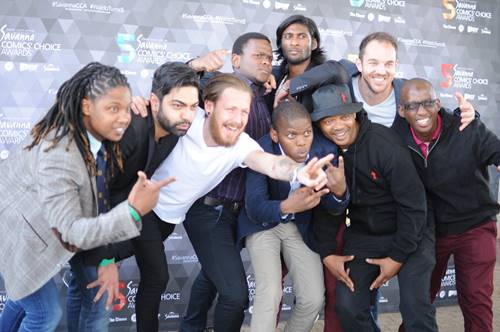 In partnership with The Times, Mzansi Magic and Kaya FM 95.9

Edgy, raw and clearly the place to be on a Sunday afternoon, this year’s Savanna Newcomer Showcase on 31 May was phenomenal. The sold-out show at The Soweto Theatre was packed to the rafters with SA’s top comedians, celebrities, media, talent scouts, casting agents and the comedy-loving public all keen to see the future of stand-up comedy.

The turnout was extraordinary. From 2.30pm, celebs started arriving for the shisha nyama pre-party and drinks, where the public got to rub shoulders with the ‘who’s who’ of the local it-scene. Famous faces included Loyiso Gola, Robby Collins, Bujy Bikwa, Trevor Gumbi, Maps Maponyane, John Vlismas, Ndumiso Lindi, Mpho Popps and TV personalities from Scandal! and Isibaya.

Kaya FM DJ’s Edsoul and Fang DaRhythm’s choice of Sunday afternoon house beats, coupled with the smoky scent of braai’d chops washed down with ice-cold Savannas, completed the authentic Soweto vibe. At 4.30pm when the buzz was at its most electric, the crowd was ushered into the theatre for the start of what promised to be a hilariously funny, truly special few hours of fresh, gritty comedy routines delivered by 19 new comics registered in the Savanna Comics’ Choice Awards’ newcomer category.

As a pre-event in the build up to the main award ceremony that takes place on 15 August, the showcase was created to give the newcomers a platform to prove to the comedy industry what they’re made of, so that they can cast an informed vote. Initially an industry affair, the last couple of years have seen it rocket into a mainstream event on the comedy calendar, with tickets selling out in record time.

Flown in by Savanna from all over the country, all newcomers were given five minutes to battle it out on stage and to show the crowd what their funny bones were made of. Naturals delivered their sets with ease, while a few of the less witty comics were subjected to cruel (yet funny) heckling from the tear-streaked audience. No one bombed but the range of comedy skill from one newcomer to the next was quite apparent. Trending throughout the night, social media was on fire with tweeted one-liners and comments from the crowd.

Meet the 19 #Savanna Newcomers who battled it out for audience & comedian votes at The Soweto Theatre on 31 May. The…

Voting only closes at the end of June, so keep your eyes open to see who the five lucky nominees will be and don’t forget to buy your ticket to Savanna Comics’ Choice Awards on 15 August at the Teatro at Montecasino. Tickets are available from Computicket for R280.00 and include access to the official VIP after party. Get yours here: http://online.computicket.com/web/event/savanna_comics_choice_awards

Grab a copy of The Times or tune into Mzansi Magic and Kaya FM 95.9 for a chance to win tickets to the awards.