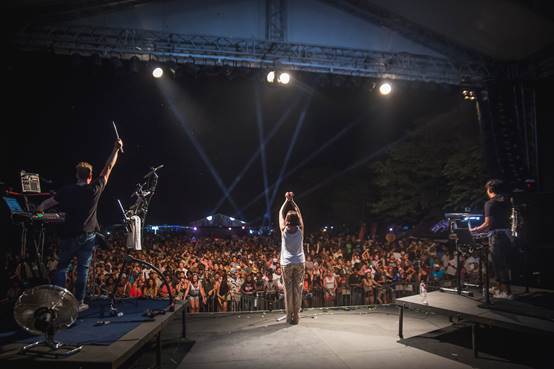 Thousands joined Mango Groove, GoodLuck, Monark, Mokoomba and many more to ring in the New Year for a music and adventure experience like no other – for the third year in a row the Jameson Vic Falls Carnival electrified the majestic Victoria Falls with an unforgettable New Year’s concert. Three days of epic music, thrilling adventure and adrenalin activities set at one of the official Seven Wonders of the World.

Seed Experiences and Love for Africa once again raised the bar by bringing a truly unforgettable experience to music and adventure lovers from far and wide. 2016 looks to push the boundaries for a bigger, better and truly unique carnival vibe.

Special thanks to our great partners, Jameson Irish Whiskey, Zambezi Lager, ZiFM, 99FM, ZambeziFM, RockFM, Carrera Sunglasses and Coca-Cola for their valued and ongoing support. Festival goers can check out the Jameson Vic Falls Carnival Facebook page for photos and to be the first to hear about the amazing 2016 lineup, travel packages and festival tickets!

Alcohol not for sale to persons under the age of 18.

About Jameson Irish Whiskey
At Jameson we believe we have perfected the art of making smooth Irish whiskey. Triple distilled whiskey like ours isn’t just born smooth and balanced. It takes our carefully crafted process used over hundreds of years to get it just right. This tradition began in 1780 with the great Master Distiller John Jameson who discovered that three distillations was best for his Jameson Irish Whiskey and we continue his legacy to this day.

About Seed Experiences
Seed Experiences is renowned for delivering world-class events to their fans such as Virgin Mobile Presents The Lumineers, Bastille SA Tour, Virgin Mobile Presents John Newman, UB40 SA Tour, Sonar presented by Olmeca Tequila, Rocking The Daisies and, The Pet Shop Boys. With Passenger, Ben Howard and Sowing the Seeds already on the cards for the first few months of 2015, fans can only expect the best live music performances, great experiences, and top production.