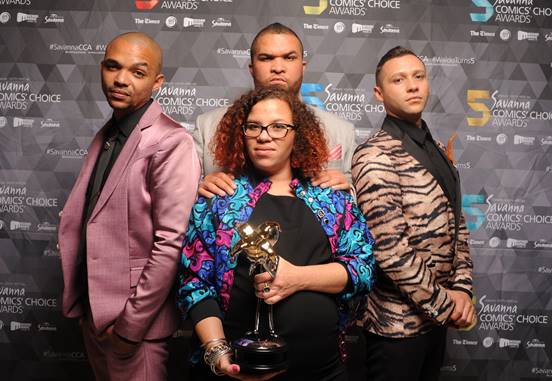 Amidst much hooting, cheering and hilarity at Teatro Montecasino last night, eight South African comics walked away with the most prestigious award the local comedy industry has to offer – a beautifully crafted Waldo statuette.

Waldo, like the winners, represent the very top of the industry as voted for by the country’s comics themselves.

Directed by much-loved funny man, Alan Committee, the show was a brilliant, slick blend of satire, music, sketch and, of course, stand-up comedy by all the winners who were present.

Waldo certainly celebrated his 5th birthday in style, with Marc Lottering, Tamara Dey, Tracey-Lee Olivier and many others providing superb entertainment at what has become Africa’s biggest comedy awards. Even the almost mythical Trevor Noah put in an appearance, even if it was in the form of a world-class video sketch by puppet-masters, ZANews.

Title sponsor Savanna was on hand to make sure the now-famous yellow carpet carried celebrities, sports stars, socialites and hundreds of eager comedians into the Teatro for the years most glamorous and hilarious awards event.

The winners who were present had the audience in stitches, in between outrageous sketches by comedians, who poked fun at government, the industry and each other.

Presenting the awards were a very endangered breed: older white people who used to be on television… which was a very funny touch considering all the recent publicity about rhinos and Cecil the Lion.

The winners themselves were an excellent reflection of achievements in the local comedy industry.

Many agree it was only a matter of time until much-loved new comic, Yaaseen Barnes, walked away with a Waldo, while a previous recipient in the Newcomer category, Schalk Bezuidenhout continues to impress, taking home the award for Intermediate comic.

The audience shared in a touching moment when Ndumiso Lindi handed Joe Mafela his Lifetime Achiever award, and to hear the great man’s humility and love for his craft as he recalled stories from decades ago was heartwarming.

The crowd went postal at the news that the first ever “Non-English Award” was bestowed on Mashabela Galane, a trail-blazer in the vernacular comedy world. More cheers ensued for Chris Steenkamp who was finally recognised for his wonderful writing and received the Comic’s Pen award.

The Audience Choice Award is the only category in which the public is allowed to vote – and they overwhelmingly chose Khanyisa Bunu, who proved why she keeps fans in stiches.

Another new award, The Best Friend of Comedy was created as Waldo’s birthday present to the industry and awarded to Goliath & Goliath, for their contribution to local comedy in a non-performance role.

The man of the hour had to be Trevor Noah, who continuously resets the realms of professional possibility, and once again scooped the Comic of the Year award, and also the brand new Flying Solo Award, which recognises a brilliant one man/woman show.

The best awards show deserved the perfect end. As a special birthday treat, this year the public were invited to the official after party to get down with Kaya FM 95.9 DJ’s, lots of Savanna and the largest group of comedians to ever gather in one place… oh, what a night!

Of course, all the best events need the best partners to support them, and the comedy industry thanks Mzansi Magic, The Times and Kaya FM 95.9 for helping to build comedy history. Special thanks also goes to Splitbeam for coming onboard to ensure that the event’s production is of outstanding quality and the highest standard.