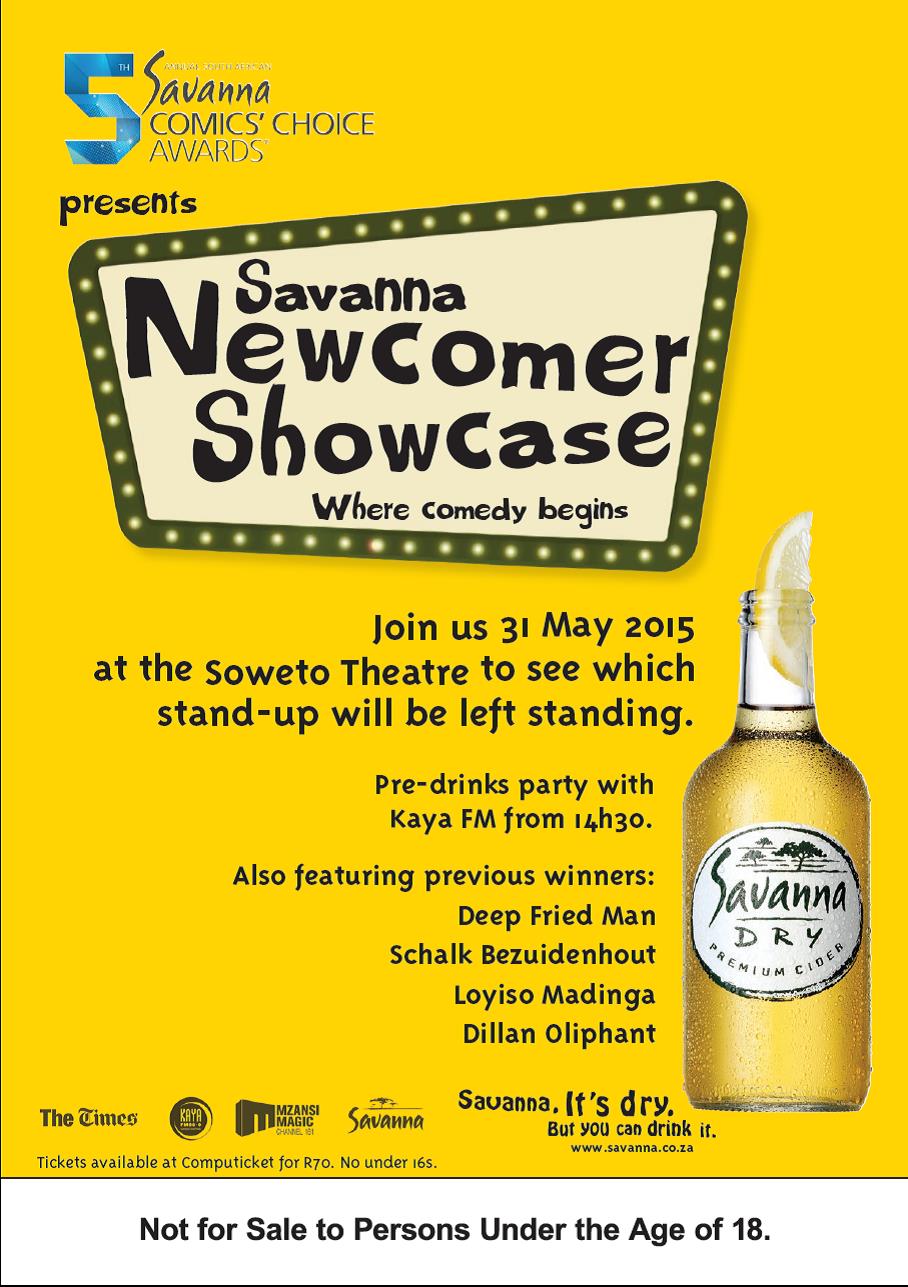 The Newcomer Showcase will be held at the Soweto Theatre on Sunday 31st May and is an incredible platform for up and coming comedians hoping to eventually win the Newcomer category at the main Savanna Comics’ Choice Awards in August.

For the first time in the history of the show the audience will now be allowed to vote for their favourite comedian on the day as well.

Each newcomer gets 5mins on stage to get as many votes from registered comedians and the audience as possible in order to be one of five comedians that will go through to be nominated for the main event.

All Previous winners of the Newcomer Showcase will not only be in attendance offering support but will also perform as well. Previous winners are Loyiso Madinga (2014), Schalk Bezuidenhout (2013), Dillan Oliphant (2012), and Deep Fried Man (2011).

It could be a really fun piece that highlights the depth of SA talent. This platform is a genuine stepping stone for an up an coming comedian.

With Some Exciting Changes To This Year’s Show!
Party with the future of SA comedy.
In partnership with The Times, Mzansi Magic and Kaya FM 95.9

On Sunday 31 May at the iconic Soweto Theatre, the country’s top up-and-coming comedians battle it out on stage to be nominated for this year’s Savanna Newcomer Award.

Twenty new comedians have exactly five minutes each to do a stand-up comedy set and show us how funny they can be. Expect special appearances by previous Savanna Newcomer Award winners Loyiso Madinga (2014), Schalk Bezuidenhout (2013), Dillan Oliphant (2012), and Deep Fried Man (2011).

Be the first to see the future of SA comedy!

Based on their performances, the industry votes for the best Newcomer, who is announced at the 5th Annual South African Comics’ Choice Awards ® (Savanna CCA’s) on 15 August at the Teatro at Montecasino.

And what’s a birthday without a party? Come early and have a drink with comedians and celebs. Doors open at the Soweto Theatre at 14h30 for a pre-show party, complete with music by Kaya FM DJ’s, complimentary snacks and a drink, and the chance to mingle with the future of stand-up comedy before the Showcase kicks off at 16h30.

And this year, for the first time ever, members of the public attending the Showcase are able to vote for their favourite comedian on the night. These public votes will be tallied together with the industry’s votes in choosing this year’s top Savanna Newcomer.

As the Savanna CCA’s celebrates its 5th birthday year, they also celebrate the fourth year that Savanna premium cider has partnered with the industry’s longest running awards show. Savanna remains committed to South African comedy through this partnership and continues to promote upcoming comedy talent.

It’s going to be an afternoon and evening of the funniest live stand-up comedy you haven’t heard (yet) – and you’ll be the first to see it!

Tickets are only R70 and include the pre-party with complimentary Savanna on arrival and food. And loads of laughs (on the house).

Seats are limited, so get your tickets now from Computicket http://online.computicket.com/web/event/savanna_newcomer_showcase/899754923/0/64675468

No under 16’s. Alcohol not for sale to persons under the age of 18.

Visit www.comicschoice.com for more information and to buy tickets to the 5th Annual South African Comics’ Choice Awards on 15 August.