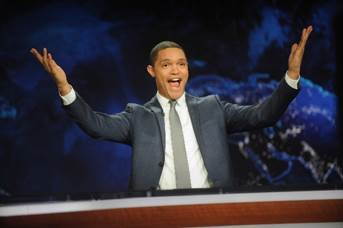 Johannesburg, 5 October 2015: As Trevor Noah settles comfortably into his third week at the helm of The Daily Show, here are his guests for the coming week:

Every week, Trevor and his reporting team at “The Best F*&#ing News Team Ever!” are continuing in The Daily Show’s proud tradition of covering the day’s news and events with incisive and insightful humour. Guests on the show to date have included comedian Kevin Hart; Governor Chris Christie, Ryan Adams, Seth Rogen, Aaron Sorkin, Evgeny Afineevsky and Rachel Maddow.