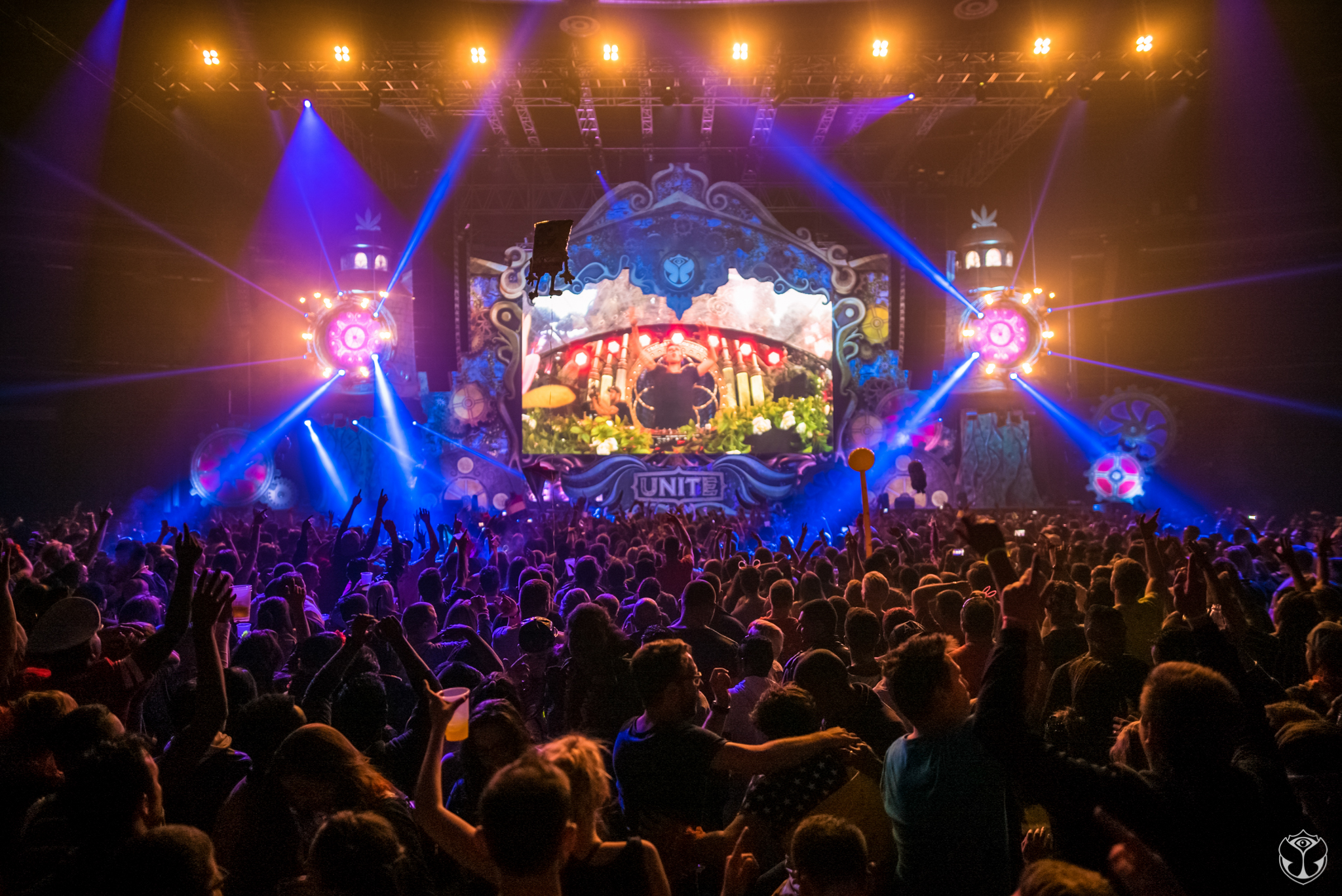 For the first time ever the magic of Tomorrowland came to South Africa on Saturday 23 July. Whether they were dressed up with national flags, flower headdresses, neon outfits or outlandish weird and wonderful creations South Africa knows how to get ready for a taste of the world’s biggest house music event. Thousands flocked to the Ticketpro Dome to experience 12 hours of non-stop house and electro music at Tomorrowland UNITE SA.

On entering the venue adorned with human-size mushrooms, antique clocks and giant flags it was clear that this was going to be an extraordinary event. Front and center was the world-famous stage, an insane 25m wide and 15m high out-of-this-world theatrical platform transporting party-goers to a magical realm of unity, music and mayhem.

First up to ignite the excited crowd was Kyle Watson, who’s unique and eclectic sound, has secured himself a spot as one of South Africa’s most successful internationally acclaimed dance music producers. Next up Household Funk upped the excitement with their feel-good tracks and vocal styling from the talented Justin Chalice. Vimo and Chunda Munki killed it with their back-to-back slick set interlacing tribal grooves and seductive vocals. Ricardo Da Costa then took to the decks with his bass heavy house and Sterra live on drums. Of course Timo ODV got the packed crowd jamming and singing along to his smash-hit ‘Save Me’. Everyone’s favourite trouble-maker Roger Goode got down and dirty with his authentic high-octane set. The Big Dawg DJ Fresh warmed up the music-loving attendees for the crossover with his charismatic stage persona and upbeat tracks.

At 8.45pm the moment we had all been waiting for was finally upon us. With the 100m HD screen counting down to the live cross-over the energy was palpable. Building bridges between Belgium and the rest of the world with a live connection from the Tomorrowland Main stage Mexico, India, Japan, Colombia, Germany, South Africa and Israel were united and welcomed to the madness. As the first International act Nicky Romero, the Jozi crowd ate up every track of explosive progressive house. Dutch house star Afrojack brought his big room live sound to the dome with catchy hooks, huge drops and exceptional vocals. During his set via the insane satellite stream, Jozi showed the world why SA was voted Dance Nation of the Year as their elated moves and waving flags were broadcast to all 6 UNITE nations.

Dimitri Vegas and Like Mike proved why they are the number one DJ’s in the world with their spontaneous performance and masterful crowd engagement with the local audience, splitting the crowd, getting them to sit down and jump-up as the bass dropped. Swedish music duo Axwell Ingrosso brought the electro euphoria as CO2 canons, sound and lighting were perfectly in unison with their Belgium show. Not to be outdone by the International heavyweights, SA favourite Dean Fuel kept the crowd pumping until the very end with a special set dedicated to 12 Years of Tomorrowland.

Complete with confetti canons, lasers, pyrotechnics, world-class production and innovative stage design this spectacle was an unforgettable event that blew South Africa away.