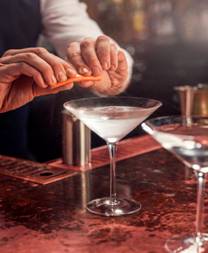 World Class bartenders are taking the evolution of cocktails to the next level – forever finding new ways of incorporating subtle flavour notes and unique textures into sophisticated cocktails that stimulate all the senses. Their passion and creativity will be showcased internationally at the World Class Bartender of the Year Global Finals, taking place in Johannesburg and Cape Town, South Africa, from August 30 to September 4th.

The World Class programme is a chance for those who are discerning about what, where and how they drink to celebrate the craft and creativity of the world’s best bartenders and to take part in the finest-drinking experiences on Earth. World Class has identified some cutting-edge trends currently employed by the most exceptional bartenders around the world.

There is a growing trend towards using a diverse array of fruits and vegetables in cocktails. Vegetables such as beet, carrot, fennel, and even snow peas are getting a good workout. Organically grown and authentically-sourced ingredients are popular among mixologists for the substance and unexpected flavours they can add to a drink.

The continued partnership between bars and farmers’ markets and local growers is making the sourcing of quality products easier than ever. As chefs have listed their purveyors, bars are also proudly talking about theirs. On the other side of that coin, the ever-shrinking world has allowed bars to access produce from all corners of the planet making for the heavy influence of international flavours that would have been nearly impossible in the pre-internet era.

Some bartenders are jumping on board the idea of “foraging” for wild ingredients and edibles – everything from pine needles to bamboo shoots to berries – to invest their creations with authentic local flavours. “From garden to glass” is becoming a popular movement among craft cocktail makers.

“Bartenders are putting just as much thought and effort into sourcing their ingredients as chefs. Discerning drinkers want to know where their drinks are coming from, and bartenders have a responsibility to ensure the quality of every ingredient is vouched for,” said Charles Joly of the United States, who currently holds the title of the best bartender of the world having won the World Class Bartender of the Year competition in 2014.

Popular cocktails are traditionally quite sweet, often incorporating fruit juices and cordials – with sugar as a core ingredient in many mixed drinks, such as Appletinis and Cosmopolitans. By throwing a dash or more of bitters into an otherwise fruity cocktail, new layers of depth and complexity can be added to its flavour. World Class bartenders are adept at creating perfectly balanced drinks that are suitable for every palate.

Made from alcohol infused with aromatic plant extracts, a rich and spicy drop of bitters can perfectly balance a cocktail. Bitters are a staple ingredient in the classic cocktails such as the Old Fashioned and the Manhattan.

“There’s been an explosion of dashing-type bitters on the market. The fact that these are deemed as a food item (as opposed to spirituous) has made it much easier for start up entrepreneurs to break into this space. Bartenders all over the world have jumped into the retail bitter game. Just 10 to 15 years ago, you had two or three options – now there are hundreds. Exotic spices, local flavours, spicy, savoury, salty, herbal… all making their way into the mix,” said Erik Lorincz of the Savoy Bar in London, who won World Class Bartender of the Year in 2010.

As the worlds of fine dining and fine drinking become increasingly interlinked, the tradition of having a drink before and after a meal is making a big comeback. An aperitif (from the Latin word aperire, meaning “to open”) is a crisp, clean beverage meant to open the palate and awaken the senses before a meal. Many include lime juice and are usually not sweet – a twinge of acidity or bitterness gets your taste buds tingling.

Low ABV drinks are growing in popularity as a complement to a meal, allowing a consumer to enjoy the interplay between food and liquid.

A digestif is usually drunk just after a meal – as the name suggests, it is intended to aid in digestion. It is often strong and can contain herb liqueurs, bitters, brandy or ports.

“These types of spirits and cocktails also come into play when we talk about food/cocktail pairing. This topic is very close to my style as I’ve always enjoyed working with the two. I was also heavily influenced by the chefs I worked with at the Aviary – I learned to give my drinks the same attention to detail and as the kitchen did its dishes,” adds Charles Joly.

Another trend emerging in the cocktail world is the use of fresh herbs – preferably home grown, organic and picked straight from the garden. It’s not just about mint and basil anymore as aromatic herbs such as coriander, dill and even parsley are today used in drinks.

More and more, bartenders are infusing the subtle flavours of tea into their cocktails – not just fruit-flavoured teas, but also sharper and more herbal varieties. Tea cocktails offer the versatility and creativity to pair with food as the tendency to use seasonal fruit and plants in cocktails, produce can disappear for a time in countries that experience harsh winters.

“I own a bar that uses only seasonal produce in its cocktails. When the fruit is in abundance, we dry it out and mix it with black tea, then store it over the summer to use in the winter. Fruit teas, black teas and green teas are all traditional ingredients that were used in punch, long ago. Seeing them utilised in cocktails today is a nod towards classic bartending. The difference is that there is a wider range of quality products for us to use,” says Tim Philips of Australia, World Class Bartender of the Year winner for 2012.