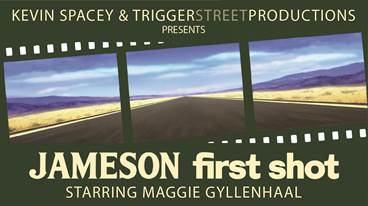 Now in its fifth year, the Jameson First Shot film competition is back. Together with Kevin Spacey and Trigger Street Productions, Jameson is once again on the hunt for the globe’s most gifted, undiscovered filmmakers with compelling stories to tell. Three talented winners will have the once-in-a-lifetime opportunity to turn their scripts into short films starring Maggie Gyllenhaal, and have them premiered in LA, with the acclaimed cast and crew in attendance.

The competition is all about giving talented filmmakers a break – a first shot at the industry. It asks aspiring filmmakers to be fearless; to write about what matters to them, tell the stories that they want to tell and, ultimately, make the film they want to make. It’s looking for undiscovered filmmakers with big ideas and an insatiable desire to create.

Kevin Spacey knows how difficult it can be to break into the film industry. Having succeeded himself, he feels it is important to “send the elevator back down,” as his mentor Jack Lemmon once told him. “It’s not about where someone is, it’s about where they might get to in 10 years if they’re encouraged, nurtured and guided,” said Spacey.

World-class producer, Dana Brunetti, who will be making the shorts alongside the winners, sees the competition as giving filmmakers outside of Hollywood a chance to shine: “We’ve opened up the competition to countries across the world; more countries means more gifted people. Hollywood doesn’t have a monopoly on talent and we want to see what the world has to offer,” said Brunetti

Maggie Gyllenhaal will play the lead in this year’s three winning films. She’s known for her fearless film choices, from Donnie Darko to Dark Knight. Her Oscar nomination for “Best Supporting Actress” in Crazy Heart and her Golden Globe film nominations for her leading roles in Secretary and Sherrybaby exemplify her talent and versatility as an actress. She has graced the stage in productions including Uncle Vanya, Three Sisters, and most recently made her Broadway debut in The Real Thing. For her most recent tour de force as Nessa Stein in The Honourable Woman she won a Golden Globe Award, a SAG Award nomination, and is currently nominated for an Emmy Award.

So what does Maggie look for in a script? The actor recommends taking a new angle: “An observation that we haven’t seen, that’s real, that people relate to, that’s complicated – as we all are.”

To aspiring filmmakers thinking of entering, Maggie recommends “putting a little bit of your actual self into what you’re doing – good art takes vulnerability.”

For its fifth year, Jameson is expanding its catchment area to give more undiscovered talent the chance to enter their work. Entrants living in the following countries are all eligible: UK, Ireland, India, Australia, Canada, SA, Bulgaria, Kenya, Russia and the US.

The competition is open to entries on 15th of October and the rules, including length and theme, can be found at http://www.jamesonfirstshot.com/.

Jameson Irish Whiskey is the world’s No 1 selling Irish whiskey. The success of the Irish brand is down to its great quality and smooth taste, coupled with a fantastic heritage, established in 1780 by the legendary John Jameson. Having played a part in film since 1998, today Jameson is involved with film festivals and events that celebrate the passion and craft of filmmaking including Jameson Cult Film Club, Done in 60 Seconds, the Jameson Empire Awards and Independent Spirit Awards, to name but a few. Jameson First Shot supports aspiring filmmakers and gives them their ‘first shot’ in the film industry by giving them the chance to direct an A-list star in their short film. Jameson First Shot is all about giving something back to a community of film craftsmen, encouraging and supporting up-and-coming film talent.

Kevin Spacey is an award-winning producer and actor – he currently serves as executive producer and stars as Francis Underwood in the Netflix original series “House of Cards”. Spacey has won Academy Awards® for his performances in “The Usual Suspects” and for “American Beauty“. His next film is “Elvis/Nixon“, starring as President Richard Nixon opposite Michael Shannon as Elvis Presley. His production company Trigger Street Productions has produced “Captain Phillips” starring Tom Hanks, “The Social Network,” and “21.” For television, Trigger Street produced “Recount” and “Bernard & Doris” for HBO, both of which garnered double-digit Emmy Award® nominations.

For over a decade, Spacey served as the Artistic Director of The Old Vic Theatre Company in London. He recently stepped down from this role. He has appeared in productions at the Old Vic, including “National Anthems,” “The Philadelphia Story,” “Speed the Plow” with Jeff Goldblum, “Inherit the Wind,” “A Moon for the Misbegotten,” and the acclaimed production of “Darrow.” Additionally, he’s won the Evening Standard and Olivier Awards for Best Actor for his role in “The Iceman Cometh,” as well as a Tony Award® for Best Supporting Actor in Neil Simon’s “Lost in Yonkers.” Spacey has also starred in the Broadway and West End productions of “Long Day’s Journey into Night,” opposite his mentor Jack Lemmon; as well as the title role in the Sam Mendes production of “Richard III,” which toured to 12 cities around the world as part of the three year OldVic/BAM/Bridge Project. He was made a CBE (Commander of the British Empire) by Her Majesty the Queen for his services to theatre.

Inspired by Jack Lemmon, Spacey has often launched initiatives to help young people get their start in the competitive worlds of film and theatre, including: Triggerstreet.com, an online community for unrepresented screenwriters and short film directors; The Kevin Spacey Foundation, which offers support to young actors, writers, directors and producers (including workshops during the tour of “Richard III”).

Most recently Kevin was awarded an Honorary Knighthood from Her Majesty the Queen.

Maggie Gyllenhaal was born in New York City. Following her graduation from Columbia University, she studied acting at London’s Royal Academy of Dramatic Art. She appeared in her first feature film, Waterland, at age 15, which was followed soon after by A Dangerous Woman and later Homegrown. The New York Times said of her 2002 break-out role in black comedy Secretary that it, ‘should make her a star.’ Indeed it did: she earned her first Golden Globe nomination for the picture and won Best Breakthrough Performance by an Actress from the National Board of Review of Motion Pictures. Not confined to film, Maggie Gyllenhaal has also performed many in many a stage play: Tom Stoppard’s The Real Thing; Patrick Marber’s Closer; Tony Kushner’s Homebody; and Chekhov’s Uncle Vanya. In 2014, she starred in the television series, An Honourable Woman – a tour de force that earned her a Golden Globe Award and an Emmy Award nomination.

Dana Brunetti Feature film and TV producer, Dana Brunetti is Kevin Spacey’s long-time business partner and President of Trigger Street Productions. He has produced multiple award-winning movies for film and television, including the Golden Globe® and Academy Award® nominated “Captain Phillips,” starring Tom Hanks, and “The Social Network,” which won a Golden Globe® for Best Picture and received multiple Academy Award® nominations and wins. Dana’s next film is the highly anticipated “50 Shades of Grey,” based of the bestselling book, having sold over one hundred million copies. Other credits include, 21, Fanboys, and the Emmy nominated Bernard and Doris, and Casino Jack. Architect of several ground-breaking deals, Dana helped secure the mega-deal with Netflix as part of their new slate of original programming for TV political thriller House of Cards, which continues the collaboration of Kevin Spacey and Social Network director, David Fincher. The show debuted in 2013 and became an instant success garnering multiple Emmy nominations and wins across its first two seasons. The show is currently in-production on its third season, which premieres in 2015. He also set up the eight year Anheuser Busch sponsorship of TriggerStreet.com, AB’s longest sponsor outside of sports.

Trigger Street Productions is an entertainment production company formed by Kevin Spacey and his producing partner Dana Brunetti in 1997. Trigger Street Productions has produced multiple award-winning movies for film and television, including the Golden Globe® and Academy Award® nominated “Captain Phillips,” and “The Social Network,” which won a Golden Globe® for Best Picture and received multiple Academy Award® nominations and wins. Other films include “21,” “The United States of Leland,” “The Big Kahuna,” and “Fanboys.” For television, Trigger Street produced the films “Recount” about the 2000 election between Bush & Gore and “Bernard & Doris,” both of which garnered double-digit Emmy Award nominations including a Best Picture of the Year win for “Recount”. TriggerStreet.com was launched in 2002 as an online community for unrepresented filmmakers, writers, readers, and film aficionados, which provides a platform for undiscovered talent to showcase their work and gain valuable exposure. Current projects include House of Cards for Netflix’s burgeoning slate of original programming.