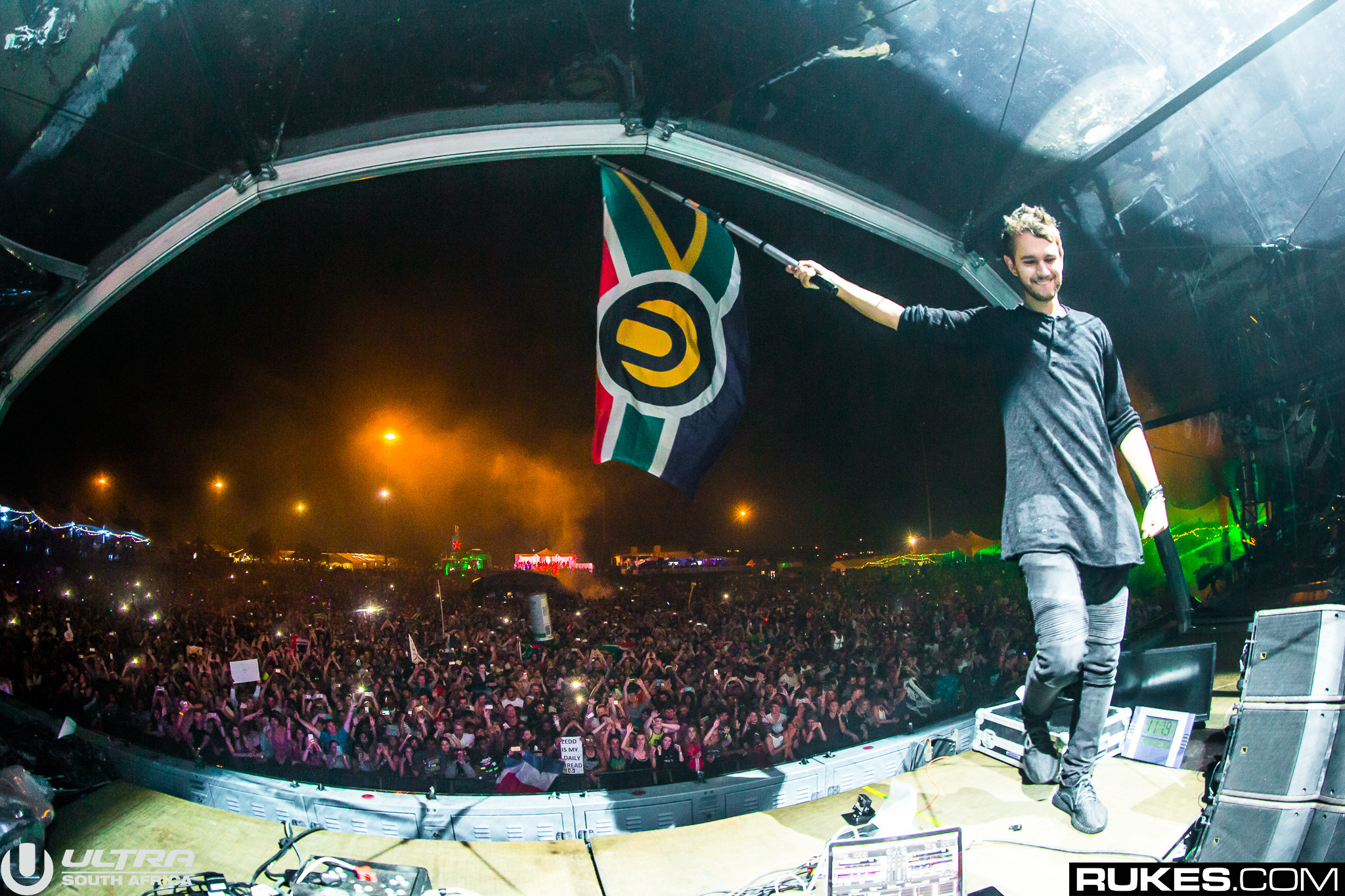 The 2016 edition marked the third consecutive year of the South Africa arm of this massive international festival brand, and this year’s 2-day format entertained more than 22, 000 partygoers per day at the iconic NASREC in Johannesburg, and 14, 000 per day at the picturesque Ostrich Farm in Cape Town.

The headline acts this year bought their A-Game to our shores with OWSLA boss Skrillex, who not only wowed crowds in both cities with his insane performances, he also got very involved with the local communities and did a number of township visits in Langa and Soweto, and even collaborated with some local DJs and producers during his stay. Billboard chart topper Zedd joined Skrillex on headline duties across both events, and alongside these heavyweights were some of the biggest names in dance music and long time Ultra stalwarts, Tiësto and Afrojack! That’s not even mentioning the host of other acts on main stage, Resistance Stage, our local artists and more.

“The foreign DJs, as always, had a great time and really love our South African audiences. The response and love for the SA crowds is always great with the internationals and we can be very proud of our energy,” states Shaun Duwe, partner in Ultra South Africa.

With Ultra Miami, the Mothership as it’s known, about to kick off the next leg of the Ultra 2016 world tour, we can feel proud that we set a high standard for the rest to follow.

The ULTRA brand was founded in 1997 by Executive Producer, President & CEO Russell Faibisch, and began producing electronic music events in South Florida, which led to the inaugural Ultra Music Festival in 1999 on the sands of Miami Beach.

The internationally renowned festival, which has taken place every March since its inception, celebrated its seventeenth anniversary from March 27-29, 2015 by bringing over 165,000 music enthusiasts to the sold out waterfront event in the heart of the City of Miami. Ultra Music Festival returns to Bayfront Park for its eighteenth annual edition, 18-20 March 2016.

Choosing to follow a unique, creative vision and a wholly organic growth focused around a true love for music, artists and fans alike, the ULTRA and ULTRA Worldwide brands represent not only the world’s biggest and most successful remaining INDEPENDENT electronic music festival brand, they are now the most international of any festival brand in the world by far. The event organizers continue to transport the unrivalled experience from the Miami flagship festival to an ever-growing number of destinations and fans all over the globe.

Over the past seventeen years, literally thousands of the world’s most iconic DJs, producers and live acts have mesmerized audiences with awe-inspiring sets at ULTRA festivals in ARGENTINA, BRAZIL, CHILE, CROATIA, IBIZA, JAPAN, KOREA, SOUTH AFRICA and of course MIAMI, as well as ROAD TO ULTRA events in CHILE, COLOMBIA, MACAU, PARAGUAY, SEOUL, TAIWAN, THAILAND, TOKYO, USA, and now forthcoming events in BOLIVIA, PERU, PUERTO RICO, THE PHILIPPINES and SINGAPORE as well as ULTRA BEACH – BALI. Each and every new global edition is founded on the same successful recipe that has been perfected over seventeen years in Miami, combining the most diverse electronic talent with the most technologically advanced, large-scale festival productions in the world.

In addition, the ULTRA brands pioneered the live stream experience, ‘ULTRA LIVE’ (whereby the festival is brought online to over 20 million unique viewers globally) and the audio broadcasting platform ‘UMF RADIO’ (syndicated to FM Radio in over 42 countries and reaching more than 22 million listeners weekly). Also ‘UMF FILMS’ collaboration with FINAL KID has seen some of the most visually breathtaking festival aftermovies in the music space, including a feature-length documentary exploring the explosion of dance music, entitled CAN U FEEL IT, which premiered at the Ultra Music Festival, Miami 2012 and was exhibited in over 500 theaters across the Unites States.

In 2014, the ULTRA and ULTRA WORLDWIDE brands continued to push the boundaries, bringing an unparalleled combination of cutting edge production and the world’s best electronic acts back to previous strongholds and new frontiers across the globe. With its most recent new festival editions breaking records in JAPAN in September 2014, SOUTH AFRICA in February 2015, KOREA in June 2015 and CROATIA in July 2015, and with the addition of the many new ROAD TO ULTRA events, the ULTRA brand has now united NINETEEN COUNTRIES across FIVE CONTINENTS worldwide.

About ULTRA South Africa
Ultra Music Festival, the World’s Premier Electronic Music event, is an internationally renowned event that was launched in 1999 in Miami, Florida.

2014 saw Ultra expand into nine countries and five continents; one of which was Africa. The inaugural Ultra South Africa was brought to the country by Electric Music. Ultra South Africa took place on 14th and 15th February 2014 in Cape Town and Johannesburg respectively, attracting a total of 40, 000 dance music lovers to party with the hottest lineup seen in the country at that time; including Tiësto, Krewella, Martin Garrix, Nicky Romero, Blasterjaxx, Afrojack and more, as well as a host of local names including DJs Fresh and Euphonik, Black Coffee and Goldfish. In total 9 internationals and over 100 local acts played the multiple stages to crowds that partied for over 12 hours in each city. Ultra South Africa 2015 attracted in excess of 50, 000 dance fans through its doors to see a selection of the world’s most in-demand international DJs and producers, including Armin Van Buuren, Axwell^Ingrosso, DVBBS, Gorgon City, Hardwell, Martin Garrix and Oliver Heldens. These global superstars were supported by a handful of South Africa’s very finest local talent, including Black Coffee, Euphonik, DJ Fresh and Goldfish, all of whom performed across stages powered by some of the world’s biggest and most advanced production. Check out ultrasouthafrica.com for more information. www.ultrasouthafrica.com

About Heineken®
HEINEKEN is a proud, independent global brewer committed to surprise and excite consumers with its brands and products everywhere.

The brand that bears the founder’s family name – Heineken® – is available in almost every country on the globe and is the world’s most valuable international premium beer brand.

Heineken® is made from only natural ingredients. Only the finest “A-yeast” is used in the brewing of Heineken® all over the world as a standard for superior quality, and responsible for Heineken®’s specific character, namely; pleasant bitterness and refreshing drinkability. It has a clear golden colour, and refreshingly fruity wheat taste.

Heineken®’s first brewery was built in 1873, and in December 1937 was brewed outside of the Netherlands for the first time since inception. In 1973 Heineken® became the no.1 imported beer in the USA, and in 1999 the Heineken® brand was elected “Brand of the Century” in the Netherlands.

Halewood South Africa has set out to build its brands to be internationally recognised. Brands include: Red Square, Caribbean Twist, Crabbie’s Sidekick, ShapShap and the latest – Hardcore!

About 5FM
5FM’s purpose is to bring together youthful South Africans through the power of music. As an entertainment powerhouse offering the best in local and international music, 5FM is a Top 40 contemporary hit radio station and multi-media content platform featuring some of the most well known media personalities and music DJs in South Africa. The station has won numerous awards, including seven consecutive Generation Next awards for Coolest Radio Station, 2012 Commercial Station of the Year at the MTN Radio Awards and has been nominated for Most Influential International Station at the Worldwide Radio Summit in Los Angeles. 5FM aims to be on the pulse of local and global music trends offering its 1.7 Million-strong nationwide audience an opportunity to co-create, engage and participate in the energy and dynamism of a fast changing youthful community. 5FM lives loud!