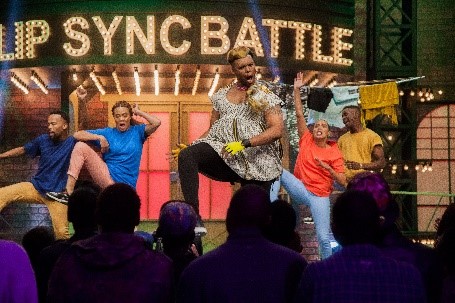 Tune into MTV This Week for “Diamond Vs Theo

Johannesburg, 24 May 2016: After Uti wiped the floor with Tumisho Masha in last week’s episode of Lip Sync Battle Africa, MTV (DStv channel 130) reveals that Diamond Platnumz and Theo Kgosinkwe are the next stars to face off in the hilarious reality contest.
This week’s upcoming battle between BET Award nominee Diamond Platnumz and Mafikizolo frontman Theo Kgosinkwe premieres on MTV, (DStv channel 130) at 20:50 CAT on 26 May 2016.

Upcoming battles will include Samkelo vs Ini Edo (2 June), Mdu vs Mapaseka (9 June), Mpho vs Basketmouth (16 June) and Nomzamo vs Tiwa Savage (23 June).

Despite channelling Luther Vandross (“Never Too Much”) and Busiswa (“Ngoku”) and busting some serious dance moves in a dress and blonde wig, Masha could make no headway against his opponent, who won the audiences’ hearts thanks to his energetic rendition of Psy’s “Gangnam Style” and Kcee’s “Pull Over”.

Hosted by Pearl Thusi with colourful commentary from ‘koko master’ and Afrobeat star, D’Banj, Lip Sync Battle Africa has previously witnessed epic battles between Cassper Nyovest vs Boity Thulo, Thando Thabethe vs Lerato Kganyago, Jason Goliath/Tol A$$ Mo vs Celeste Ntuli/Nina Hastie, and Flavour vs Maps Maponyane.
Tune in to Episode 7 of Lip Sync Battle Africa on MTV (DStv channel 130) on Thursday 26 May at 20:50 CAT to find out who takes home the winner’s belt and the biggest bragging rights on the planet.