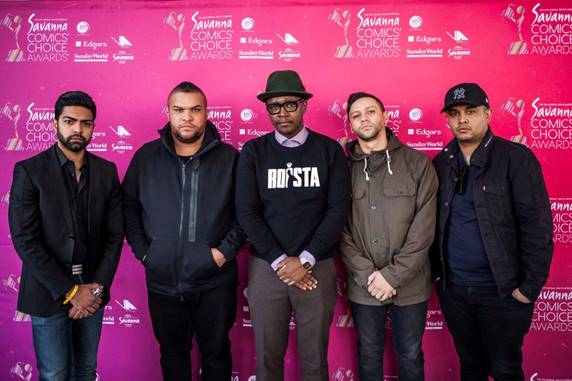 Sunday 29 May saw the 4th annual Savanna Newcomer Showcase rock the Soweto Theatre for its sold out show once again. Careers were made as SA’s 25 newest comedians were each given five minutes to show the comedy industry, talent scouts and the press what they’re made of in the hope of garnering votes for this year’s Savanna Comics’ Choice Awards®.

With 13 acts in the first half and 12 in the second, it was a jam-packed evening of applause, one-liners, body-shaking laughter and the occasional cringe-worthy moment as some newcomers knocked it out the park while others were simply knocked out.

Each year the event sees more applicants than before, with a whopping 39 newcomers registered in the category this year. Only those who haven’t performed at the showcase before get an opportunity to be on stage, but if the numbers continue to grow we’ll need two showcase sessions next year to accommodate them all. Incredible proof of Savanna Premium Cider’s testament to supporting comedic talent from the bottom up!

Trending on Twitter throughout the night, the audience took to social media to show their support for the young talent on stage as well as the MC who totally killed it, the legendary Loyiso Gola.

Two things really stood out this year: there were more vernacular comedians than ever before (complete with Xhosa clicks and an Indian-vernac songstress) and an exciting rise in female talent.

Hailing from all over SA, Savanna flew the newcomers in (some of whom had never been on a plane before), put them up at the Protea Hotel Fire & Ice Melrose Arch and gave them an experience that they’ll never forget. Being part of the audience was one thing, but chilling in the green room with your new fellow-comedian friends and all the established comics who came out to support the event was where things got really special. Roni Modimola, Mashabela Galane, the Goliaths, Robby Collins, Sifiso Nene, Dillan Oliphant, Yaaseen Barnes, Mojak, Ndumiso Lindi, Nina Hastie and Pule were just some of the industry heavyweights that the newcomers got to hang out with, cementing it as once-in-a-lifetime occasion.

The party kicked off at 14h30 with banging tunes from Kaya 95.9 FM’s duo Rhythm Sessions’ Edsoul & Fang DaRhythm, a shisa nyama to feed the masses and complimentary Savannas. Adding to the vibe were Vuzu TV’s crew who captured the essence of the day along with Jo’burg’s top press and paparazzi.

Produced by John Vlismas and Taffia Keight of Whacked, you missed a treat by not being there but keep an eye on socials for when the show will air on VUZU AMP.

Big thanks to Savanna Premium Cider, Kaya FM 95.9, Sunday World and VUZU AMP for helping to put this event firmly on the map.

Want to see who’ll win? Get your tickets now for the awards event on 3 September at the Teatro at Montecasino. They’re only R250 – R295.