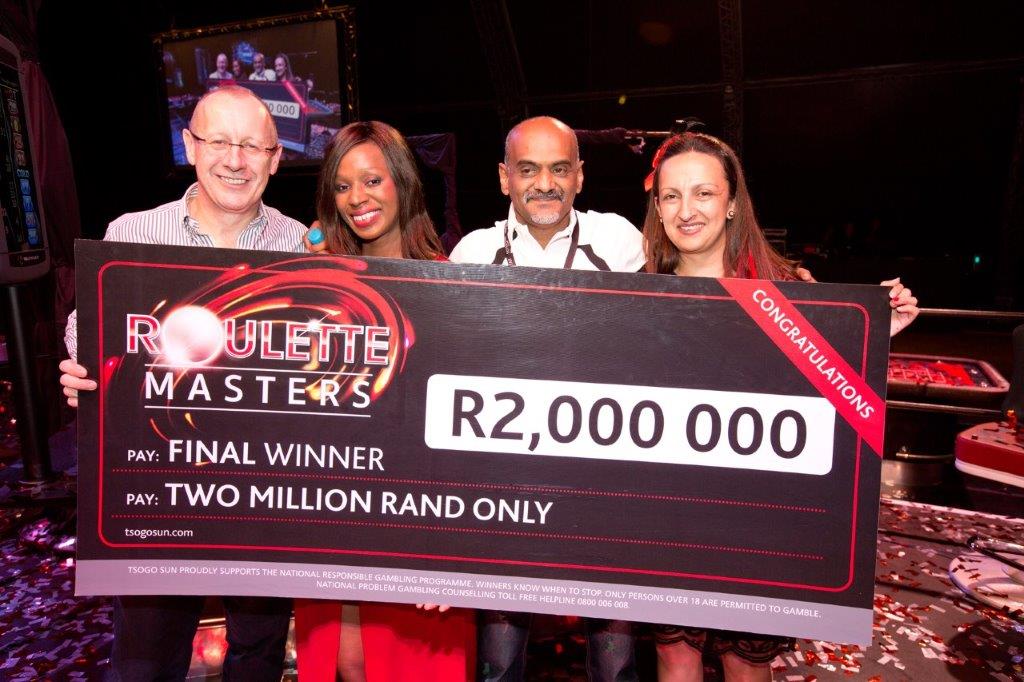 The first prize winner of Tsogo Sun’s third annual Roulette Masters is a delighted Gnanasagaren Gounder from Randburg who stayed the course in the exciting group-wide tournament and took home a cool R2 million first prize at the grand finale held at Silverstar on 19 March. Gnanasagaren qualified and represented Silverstar Casino in the West Rand of Johannesburg.

“As in previous years it was a very tense final, with the outright winner only being decided on the last spin. Our congratulations go to Mr Gounder who demonstrated skill and strategy in the adrenaline-fuelled final stages of this highly popular tournament,” says Steve Hight, Tsogo Sun’s Director of Gaming. “Of course, he wasn’t the only winner, and we also congratulate the six other finalists who made it through to the finals and all walked off with cash prizes totalling just under R1.5m.” The seven finalists who made it through the semi-final rounds represented five of the 14 Tsogo Sun properties, namely Silverstar, Suncoast, Queens, Hemingways and The Caledon.

Hight notes that the success of the tournament saw the total prize pool increasing from an initial guaranteed R2.5 million to just over R4 million due to the unprecedented number of buy-ins. “This tournament offers the highest prize money for a Roulette tournament held anywhere within Africa with a buy-in of only R100, and every year we’re thrilled to see the growing enthusiasm for it among players at all our casinos.” The total prize money for the three Roulette Masters tournaments to date amounts to just over R10.1 million.

“It’s extremely gratifying that two of our smaller properties were represented in the finals, as this is one of the greatest benefits of a group-wide tournament of this nature. Under normal circumstances, patrons at casinos in outlying areas would not have the opportunity to compete for such substantial prizes, and this one of strengths of the Tsogo brand,” says Hight.

Roulette Masters launched on 19 January and qualifying rounds took place at the respective casinos – Montecasino, Gold Reef City and Silverstar in Gauteng; SunCoast, Golden Horse and Blackrock in KZN; The Caledon, Garden Route and Mykonos in the Western Cape; Emnotweni and The Ridge in Mpumalanga; Hemingways and Queens Casino in the Eastern Cape; and Goldfields in the Free State – until 3 March. The unit finals took place on 5 March and 40 hopefuls then went through to the group semi-finals, at Silverstar on 19 March which was whittled down to seven finalists in the grand finale.

Interestingly, the wheels at Tsogo Sun’s 14 casinos spun more than 12 800 times for the duration of the tournament – with every spin of the wheel increasing both the stakes and the nail-biting excitement that is one of the hallmarks of the tournament, for players and spectators alike.

“This tournament continues to grow from strength to strength, and is a highlight on the Tsogo Sun gaming calendar,” says Hight, who adds that Tsogo Sun is committed to delivering memorable experiences to all its guests at all its properties – every time. “We believe our tournaments, which are available to all players with the potential to win big prizes, contribute significantly to this commitment and create an unprecedented level of excitement on our casino gaming floors, adding richly to the entertainment for both players and spectators.”

The final at Silverstar was a glittering affair that saw the semi-finalists and finalists being treated to a VIP experience, with a “live” carpet to welcome the guests, roaming saxophonist, mime, visual poi dancers, and culinary extravagances. “It was a privilege to host the Roulette Masters final at Silverstar Casino,” says Shane Collinson, Operations Director and Complex General Manager of Silverstar. “There is nothing quite like West Rand hospitality and we were delighted to show off our property to players from around the country. A huge congratulations to Mr Gounder for his win, and for representing Silverstar in the final.”

About Tsogo Sun
Tsogo Sun is the leading hotels, gaming and entertainment company in South Africa, providing a variety of hospitality and exciting entertainment and leisure experiences. Combining an established heritage with a professional and energised approach, the group proudly encompasses 14 casinos and over 90 hotels in South Africa, Africa, the Seychelles and Abu Dhabi.

The exciting urban and resort casino portfolio includes the most popular entertainment destinations, strategically located throughout South Africa. In the Gauteng province, Tsogo Sun owns the group’s flagship property, Montecasino in Fourways, which features, amongst other attractions, the award-winning Teatro; Gold Reef City Casino and Theme Park in Southern Johannesburg; and Silverstar Casino to the West in Krugersdorp. Additional properties are owned and operated in the Western Cape, Eastern Cape, Free State, Mpumalanga and KwaZulu-Natal, including the jewel on Durban’s Golden Mile, Suncoast Casino, Hotels and Entertainment.

Tsogo Sun Citizenship is the group’s corporate citizenship strategy which encompasses three areas of focus. This includes Corporate Social Investment, whereby the group promotes the development of learners through three academies which offer holistic, full-year programmes centred around sport, art and education; Entrepreneur Development which focuses on skills-based entrepreneurial development through its Tsogo Sun Book a Guesthouse and Supplier Development programmes; and Environmental Education, committed to initiatives that reduce the impact the business has on the environment.