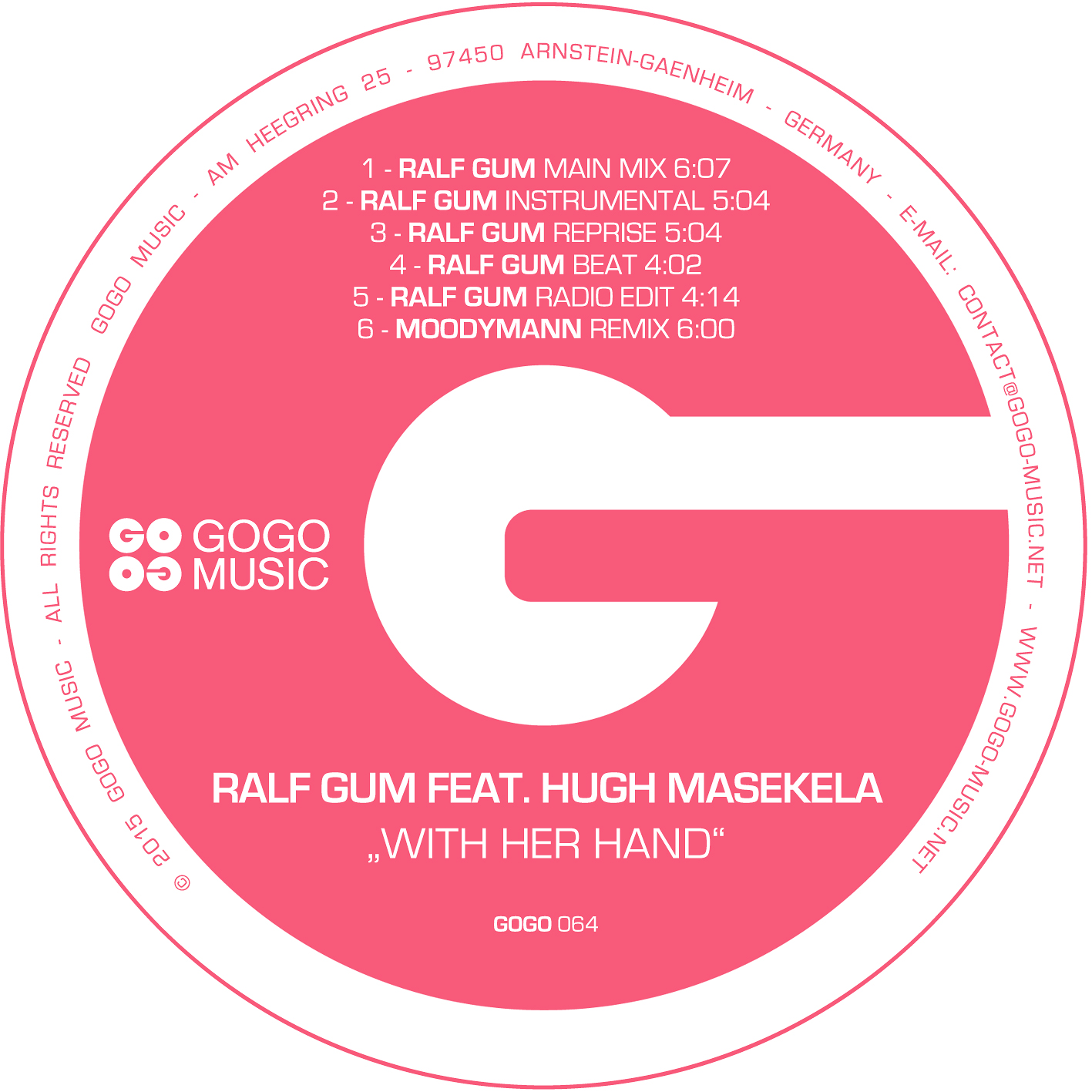 GOGO Music takes pride in presenting the third single from Ralf GUM’s highly acclaimed album, ‘In My City’, which was selected as the Best Dance Album 2014 by iTunes. ‘With Her Hand‘ features the iconic South African jazz musician Hugh Masekela and brings under Ralf’s leading together more legendary artists in one recording, as it was written together with Monique Bingham who sings as well the backgrounds vocals and produced together with Phil Kullmann aka Raw Artistic Soul. The release includes a Moodymann remix, delivered in his very own Detroit style.

Ralf GUM established in the top-league of the most prolific artists in the global house music scene since a while. He convincingly performed as a DJ all over Europe, Asia, the Middle East, South- and North America as well as Africa. But Ralf GUM not only fascinates as the unique DJ. In equal measure Ralf GUM’s productions have helped him building up a reputation as a forward thinking tastemaker influencing countless fellows. Ralf’s third album ‘In My City‘ is prove that he is able to follow up successful projects, such as his gold awarded 2012 long-player ‘Never Leves You’, and surpass his own high standards at any time. ‘In My City‘ became one of the most celebrated albums of 2014 and was selected as Best Dance Album of 2014 by iTunes South Africa, while international media celebrated it extensively. IDM Mag (ZA) said that ‘‘In My City’ has almost instantly been dubbed as a classic‘, DMC World (UK) acknowledged that ‘the German superstar brings beautiful house music to our world‘, while Spirit Of House (Switzerland) noted that ‘what you get with ‘In My City‘ is the finest in soulful house music this planet has to offer.‘

Hugh Masekela is a world-renowned flugelhornist, trumpeter, bandleader, composer, singer and defiant political voice who remains deeply connected at home, while his international career sparkles. In 1960, at the age of 21 he left South Africa to begin what would be 30 years in exile from the land of his birth. On arrival in New York he enrolled at the Manhattan School of Music and immersed himself in the jazz scene there. He developed his own unique style under the tutelage of Dizzy Gillespie and Louis Armstrong. Hugh performed alongside Janis Joplin, Otis Redding, Ravi Shankar, The Who and Jimi Hendrix in 1967 and the following year his instrumental single ‘Grazin‘ in the Grass’ went to number one on the American pop charts and was a worldwide smash, elevating Hugh onto the international stage. His subsequent solo career spans 5 decades now, during which he has released over 40 albums. He worked with such diverse artists as Harry Belafonte, Dizzy Gillespie, The Byrds, Fela Kuti, Marvin Gaye, Paul Simon, Stevie Wonder and the late Miriam Makeba. Hugh returned to South Africa in 1990 where he was honoured with the highest order in 2010: The Order of Ikhamanga. After joining U2 on stage in 2011, their frontman Bono described playing with Hugh as one of the highlights of his career. At the age of 75 Hugh maintains a busy international tour schedule, while he still finds time to work with talents like Ralf GUM on such innovative outings as ‘With Her Hand’.

Moodymann aka Kenny Dixon Jr. is an outspoken voice in the normally non-confrontational world of electronic dance music. His sound is a hybrid form of techno/house dance music via innovative use of reworked riffs, samples and grooves. Utilizing low-slung bass lines and an approach to drum programming that is diametrically opposed to the tendency to push the tempo faster and faster, he has achieved classic status. His mix of ‘With Her Hand‘ sees him cutting and pasting up the horn- and vocal-parts in his very special way.

‘With Her Hand‘, the 3rd single taken from Ralf GUM’s album ‘In My City‘, is a deep musical piece talking about a topic being close to the artists’ hearts. Lyrically inspired by the reconciliation of Winnie Mandela with Nelson shortly before his sad passing in 2013, this tune is truly a song, which is fitting GOGO Music’s mission to deliver real meaningful dance music.

GOGO Music … music it is and is it!