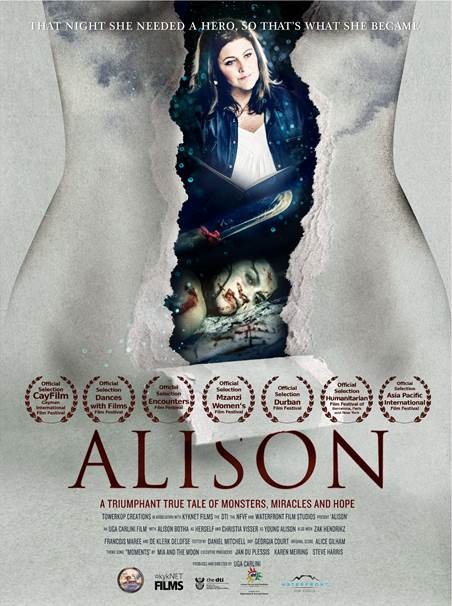 Monday, 30 May 2016 – The world premier of award-winning South African filmmaker and writer, Uga Carlini’s hybrid film, Alison The Movie is set to debut at the Encounters International Film Festival this week.

That night she needed a hero, so that’s what she became.

“I am so grateful and very proud that Encounters have chosen to showcase the Alison movie at their long-standing, admired film festival in June. And, I have to admit, a little school-girl-like-shriekingly-giggly and excited about it too! Trying to hold it together. It is a bit surreal – knowing that audiences will soon be viewing our film – it feels like standing on the brink of a bungy-jump, scared to step off the ledge but knowing that you want to jump more than anything and that it will be so worth it. I‘m looking forward to that feeling” shares Alison Botha.

A special, FREE, Filmmakers in conversation event with director Uga Carlini and Alison will be hosted Saturday 4 June @10.00 – 11.00 am. This session explores the complex relationship between filmmakers and their subjects. Developing trust, negotiating access and walking the fine line between the public and the private. Offering insights into these and other questions, Uga Carlini and Alison Botha (Alison: a Tale of Monsters, Miracles and Hope) will discuss and reflect upon their relationships. RSVP to pa@encounters.co.za

Uga Carlini from Towerkop Creations specialises in female driven heroine stories so there could not be a higher honour for her than to make her debut feature film about one of South Africa’s most loved heroines. Thus her option on the best-selling book I Have Life has translated into her full-length hybrid feature doc / film Alison. Translated into 7 languages and a perennial on Penguin’s best seller list since 1998, the book tells the harrowing story of Alison Botha, who was raped, stabbed and disemboweled – and survived to rebuild her life as an inspirational speaker. The film deals with so much more though as we also get to see what Alison has done and become since. Penguin Random House will also be publishing a film tie-in edition of the top-selling book I have life: Alison’s Journey as told to Marianne Thamm. The new edition includes a new chapter in which Alison covers events since the publication of the book in 1998 and will be unveiled at Encounters Film Festival.

This is the first time Alison has ever allowed cameras into her home. “Alison” is one of South Africa’s most hotly-anticipated hybrid films. Deploying a bold mixture of fairy tale idiom and unflinching frankness to tell its story of survival, resilience and triumph, Alison has already been dubbed “a story of monsters, miracles and hope”. Locally it has been selected for the Encounters International Documentary Film Festival (2 – 12 June), Durban International Film Festival (16 – 26 June), is opening film of the Mzanzi Women’s Festival (5 August) and is set for an exclusive Nu Metro Women’s Month theatrical release on the 12th of August 2016. For more cinema info and bookings, call 0861-CINEMA (234362) or go to www.numetro.co.za (bookings open 10 June 2016).

The film will feature many real-life heroes from that night, as well as the acting talents of Christia Visser as Young Alison, Zak Hendrikz, De Klerk Oelofse and Francois Maree. Directed, produced and written by Uga Carlini and made in association with Towerkop Creations, kykNET Films, the DTI, the NFVF and Waterfront Film Studios. An English and a part Afrikaans version of this film has been made – a first for the South African feature film landscape.