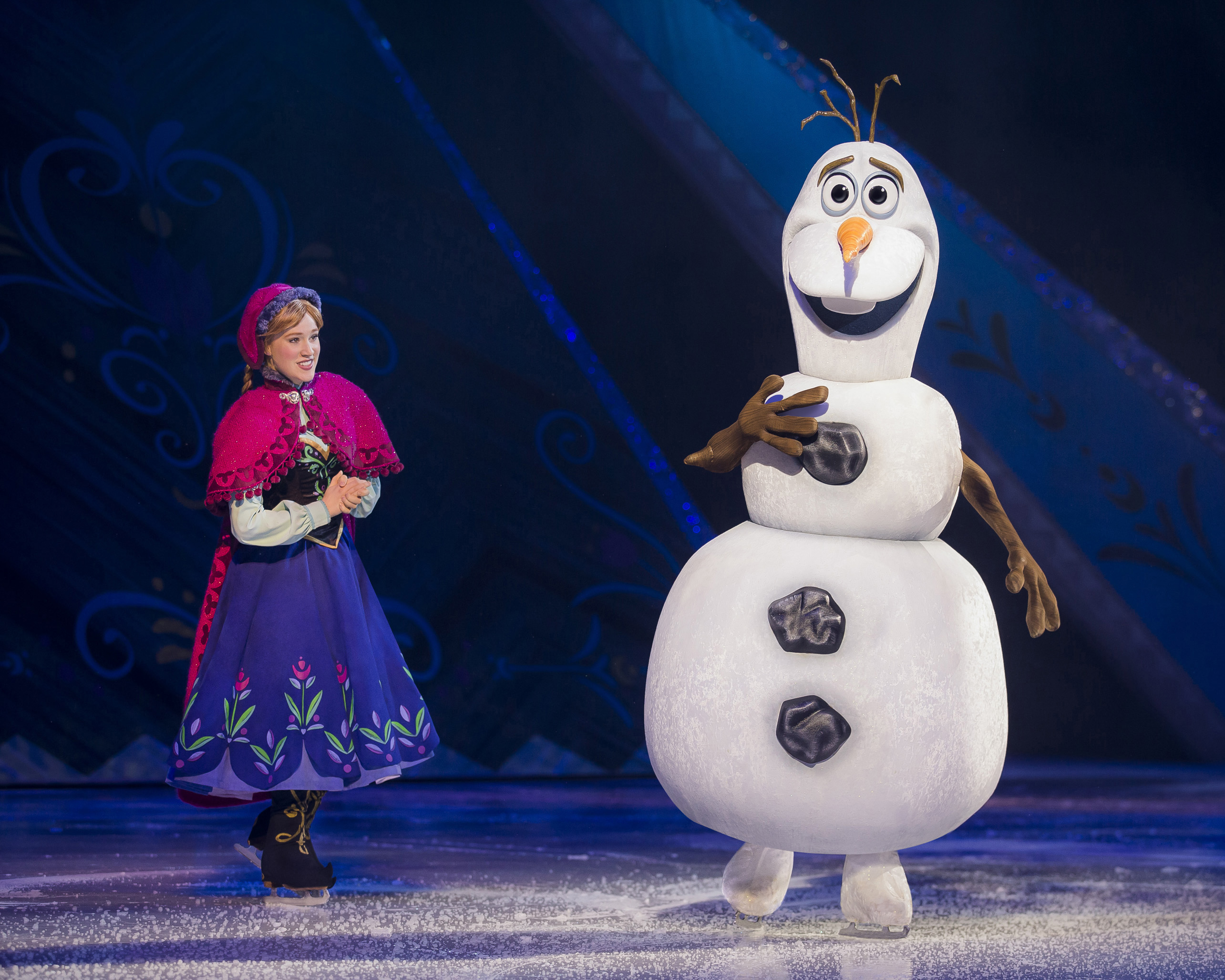 Disney On Ice presents Worlds of Enchantment Takes Families on a Captivating Adventure to Four Magical Locations
New Production Features Dynamic Sisters Anna and Elsa from the #1 Animated Movie of All Time Disney’s Frozen
Also watch Lightning McQueen, Tow Mater and the crew of Disney●Pixar’s Cars take to the ice

Presented by Feld Entertainment Inc and leading local promoter, Showtime Management in association with DSTV, Worlds of Enchantment opens on Friday, 24 June 2016 at The Dome, Johannesburg and runs until Sunday, 03 July 2016. The production moves to the Grand Arena, GrandWest, Cape Town from Wednesday, 6 July 2016 to Sunday, 10 July 2016. Tickets are on sale now at Computicket.

Audiences will enter the fantastical wintery world of Arendelle with royal sisters Anna and Elsa from the BAFTA and Academy Award® winning and number one animated feature film of all time, Disney’s Frozen. Anna, a girl with an extraordinary heart, embarks on an epic journey with the hilarious snowman Olaf and rugged mountain-man Kristoff to find her sister, the magical Elsa, whose icy powers have trapped the kingdom of Arendelle in eternal winter.

The #DisneyOnIce magic returns in 2016 with Worlds of Enchantment!Join the dynamic sisters Anna and Elsa from Frozen,…

“Our re-creation of Arendelle and the visual splendor on the ice sets the stage for the magical transformation from summer to winter,” says Producer Nicole Feld. “While it might seem obvious that Frozen is well suited for the ice, this Disney On Ice production will touch audiences emotionally through innovative show elements and world-class skating.”

In Radiator Springs, life-size Disney●Pixar’s Cars characters – Lightning McQueen, Tow Mater and the crew – take their high-octane personalities to the ice. Featuring state-of-the-art, custom animatronics, their eyes and mouths move with every twist and turn on the frozen highway. Mater has amusing antics in store as the Cars characters rock the ice with jumps, spins and freewheeling fun.

“Worlds of Enchantment connects classic and new Disney stories,” says Producer Kenneth Feld. “Audiences will be blown away in Radiator Springs when they encounter the unforgettable crew of animated cars, built to scale and live on ice. They will see their all-time favorites like The Little Mermaid and Disney●Pixar’s Toy Story 3 and discover a story full of action, magic and unforgettable characters with Frozen. ”

“Disney On Ice has become a staple Winter event on the South African entertainment calendar and we are seeing the audience grow year on year due to the quality of the various productions. In Disney On Ice presents World of Enchantment we are extremely lucky to have the smash hit story Frozen, together with other Disney classics such as The Little Mermaid, Toy Story and Cars. This is a spectacle not to be missed!” says Showtime’s Tony Feldman.

Patrons are asked to please note that owing to safety regulations each person, irrespective of age must have a purchased ticket. Book now at Computicket by calling 0861 915 8000, visit www.computicket.com or your nearest Computicket service centre. For more information, visit the Disney On Ice website (http://www.disneyonice.com) and stay current on the latest news through social media on Facebook (www.facebook.com/DisneyOnIce), Twitter (@DisneyOnIce/@NicoleFeld (show’s producer twitter feed) and YouTube (www.youtube.com/DisneyOnIce)

About The Walt Disney Company in Africa
The Walt Disney Company (TWDC), together with its subsidiaries and affiliates, is a leading diversified international family entertainment and media enterprise with five business segments: media networks, parks and resorts, studio entertainment, consumer products and interactive media group. TWDC is the home of Disney, Disney•Pixar, Marvel, ABC Studios, ESPN and Lucasfilm.

The Walt Disney Company Africa (TWDCA) has been active across the continent, primarily out of South Africa, for over 50 years. TWDCA has three channels on the Multichoice DStv platform which operates across the continent – Disney Channel, Disney Junior and Disney XD – and is one of the leading provider of children’s TV channels in Africa. Disney is also one of the top distributors of US programming in the region, bringing network series, movies as well as Disney-branded kids and family content to TV viewers. These include top rating US network ABC Studios series such as Grey’s Anatomy, Revenge, American Crime, Marvel’s Agents of S.H.I.E.L.D. and How to get away with Murder.

TWDCA’s film distribution arm is a leader for family movies in cinemas and on DVD and Blu Ray. Marvel’s Avengers: Age of Ultron released in cinemas on 24 April and featured scenes shot in Johannesburg – the film topped Marvel’s 2012 release of Avengers at the local box office. The Avengers effect has led to up to a combined 75% box office growth of subsequent Marvel theatrical releases Iron Man 3, Captain America: The Winter Soldier and Thor: The Dark World on their predecessors. Recent animated feature releases include Disney•Pixar’s Inside Out and Disney’s Big Hero 6. Audiences can look forward to two new releases from Disney•Pixar in 2016 – The Good Dinosaur and Finding Dory. The frenzy around Frozen, the biggest animated film of all time worldwide, continues with the announcement of Frozen 2 in the pipeline. Highly anticipated across the globe, Star Wars returns to the big screen this December with Star Wars: The Force Awakens.

On the local front, together with Marvel’s Avengers: Age of Ultron Johannesburg shoot, the live-action film Queen of Katwe recently wrapped production in Johannesburg and Kampala. ABC Studios is currently in production on the live-action series Of Kings and Prophets in Cape Town and Disney Channel has begun its first ever local production, I Love Violetta. The series features South African presenters and airs alongside the third season of the channel’s #1-rated show, Violetta.

Feld Entertainment’s Disney On Ice returned to South Africa for the fourth time in 2015 with Let’s Celebrate! with a 21% year-on-year increase in attendance. When it debuted in 2012 with Worlds of Fantasy, Disney on Ice sold out the Dome (Africa’s largest indoor arena) eight times in one weekend, an achievement never-before witnessed.

To find out more about all things Disney, kids, tweens and families can visit the dedicated website www.disney.co.za, mobisite disneyafrica.mobi, or facebook page www.facebook.com/DisneyinAfrica