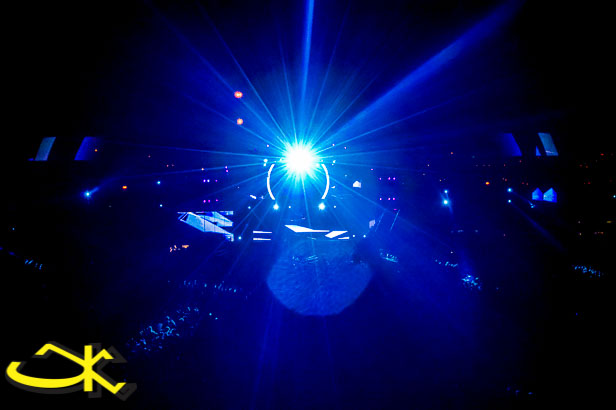 Ultra is one of the most anticipated festivals internationally, so it coming to South Africa for its second year with an even bigger audience showed that South Africa loved it the first time around.

There were 2 events (Johannesburg and Cape Town), 2 brand activations (Huawei and Heineken) and 3 dancefloors (UMF Radio, Electric, and Main Stage).

I was able to catch the Johannesburg leg of Ultra SA which ended the Ultra SA tour in a big way.

The UMF Radio stage proved true to its naming. At one point there were enough people on stage dancing behind the DJ to make it feel like you were at a club or listening to really cool radio show. The UMF Radio stage didn’t stay confined to the sound of EDM but ventured into other various genres which kept the crowd dancing throughout the festival.

The Electric Stage was a personal favourite to many because it brought the biggest South African DJs on 1 stage. The crowd truly loved this as they were lost in the music each DJ played. The best part of this stage were the fireworks that went off time and time again. This stage truly had its own style.

The Main Stage was where everyone was. The crowd didn’t wait for the headliners either to come to this stage, they were there waiting from the get go. The crowd was truly responsive on this stage, jumping and waving their hands in the air when required. The lighting; flames; dancers and visual effects which were in constant synchronization with the DJs set kept everyone in awe. Whether you were on the stage or watched from the crowd, you would agree that this stage was truly beautiful.

The Huawei activation was a cool factor. With its free slush puppies which came in handy as it was hot; free candy; wacky photography section that allowed the images to be printed out for free, a secure place to charge your electronic devices and Huawei devices on display to test drive, this section had everything right going for it and all you needed to enter was the Huawei Club Culture app.

The Heineken activation (Heineken Star Club) proved to be a favourite amongst many, from photographers to the crowd. All you needed to do to enter the section was register with Heineken to win a trip to Miami and get a QR Code with your own personalized message on it, then you were done. This gave you access to free WiFi, a personal Heineken bar and the best view of the Main Stage, which also included a full view of Johannesburg. There was no mystery to why people loved it.

There was also a Smoker’s Lounge, which confused me because Ultra SA was an outdoor event but nonetheless, the lounge did come with a small pool to cool down in, so that made it worth it.

The VIP and VVIP sections were on opposite ends of the Main Stage, which would have confused to what the difference between the 2 were but the VVIP section came with an upper deck which made sense once you got in. Both sections had access to their own toilet facilities and a bar.

In conclusion, Ultra SA in Johannesburg was truly an amazing experience. The organizers planned everything well as the layout was better than last year because even though it was full, we could walk around. The medics were easy to find and also walked around making sure everyone was okay. The toilet facilities weren’t crowded in the male section but the female side had a queue. The security was visual, with SAPS also being available. The food stalls didn’t run out of food. The only downside was there weren’t enough dustbins or they were badly positioned. I did notice a couple of people using the Park & Ride service that was available, so that helped out a lot.

I even met Ultra fans from different countries, like Brazil, Netherlands, Zimbabwe, Ghana and Portugal during the festival.