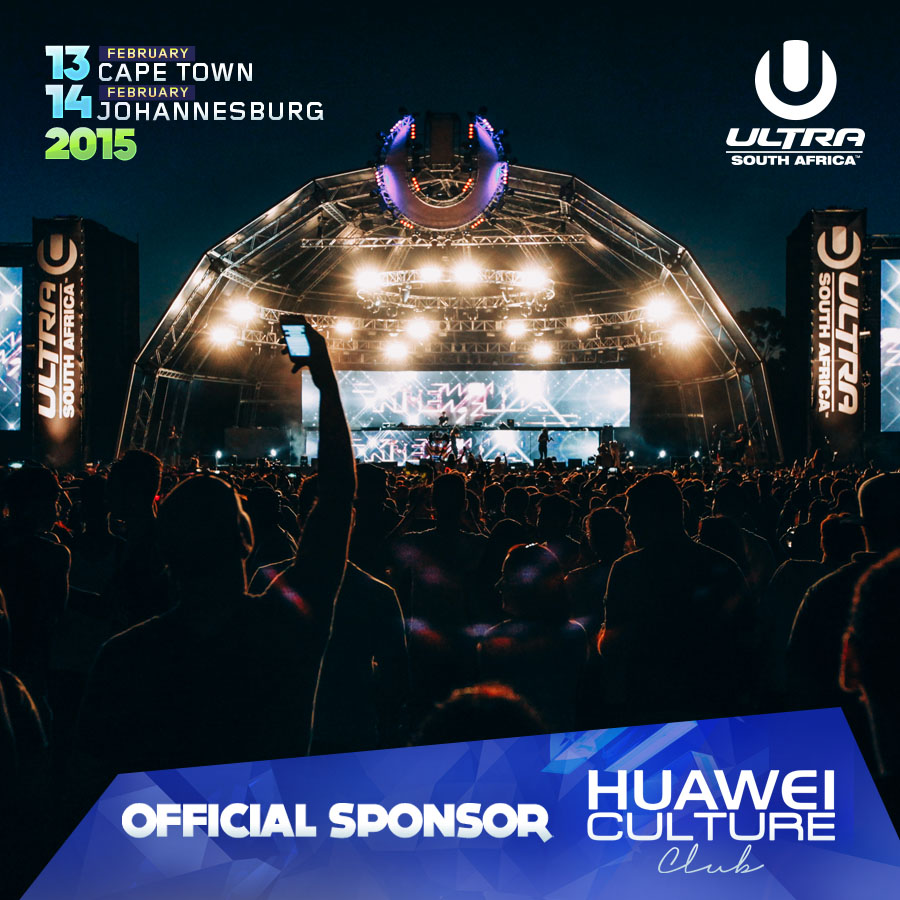 Ultra is one of the world’s most powerful dance events and the South African edition is set to thrill over 40,000 electronic dance music fans across Cape Town and Johannesburg with international headline artists like Armin van Buuren, Axwell^Ingrosso, Hardwell, Martin Garixx, DVBBS, Gorgon City and Oliver Heldens.

Fresh from its launch late last year, Huawei Culture Club is fast growing into one of South Africa’s top platforms for fans to access the best music and entertainment events around the country.

“With Ultra being the largest Electronic Dance Event in the world, it falls in line and resonates with our brand, Huawei encourages people to Live Large and experience life boldly. Like our latest large screen devices, Ultra allows you not only to broaden your horizons but also to see more, do more and experience more” says Yudi Rambaran, Huawei’s Product Marketing Director for South Africa.

As its first offer to Ultra South Africa fans, the Club is offering a R100 discount on all Ultra tickets purchased through the Huawei Culture Club app (limited quantities).

Already thousands have downloaded the Huawei Culture Club app and received access to app-only discounts, content and more. Be part of the growing community – download the app from the Google Play Store here to secure your Ultra ticket discount and chances to win. The app will soon be available on iOS.

A digital and physical hub of news, information, tickets, concerts, DJs and content. Huawei Culture Club is where some of the hottest events in South Africa are born and executed. Already Huawei Culture Club has been part of Space Ibiza SA, Peachy SA, NYE South Africa and now Ultra South Africa.
Become part of the global community at the forefront of music culture and gain exclusive access to discounts, promotions and more. Visithttp://www.huaweicultureclub.co.za/ or download the app on Google Play Store.
#HuaweiCultureClub is powered by Huawei, a leading global information and communications technology (ICT) solutions provider with the vision to enrich life through communication.

Ultra Music Festival, the World’s Premier Electronic Music event, is an internationally renowned event that was launched in 1999 in Miami, Florida. 2014 saw Ultra produce festivals in nine countries across five continents; one of which was Africa. The inaugural Ultra South Africa was brought to the country by Electric Music. Ultra South Africa 2014 took place on February 14 and 15 in Cape Town and Johannesburg respectively, attracting a total of 40, 000 dance music lovers to a party with the hottest lineup seen in the country at that time. With headliners including Tiësto, Krewella, Martin Garrix, Nicky Romero, Blasterjaxx, Afrojack and more, as well as a whole host of local stars, including DJs Fresh and Euphonik, Black Coffee and Goldfish, a total of nine international acts and over one hundred local acts played across multiple stages to crowds that partied for over 12 hours in each city. Ultra South Africa returns in February 2015 with an even bigger and better show. Check out ultrasouthafrica.com for more information.