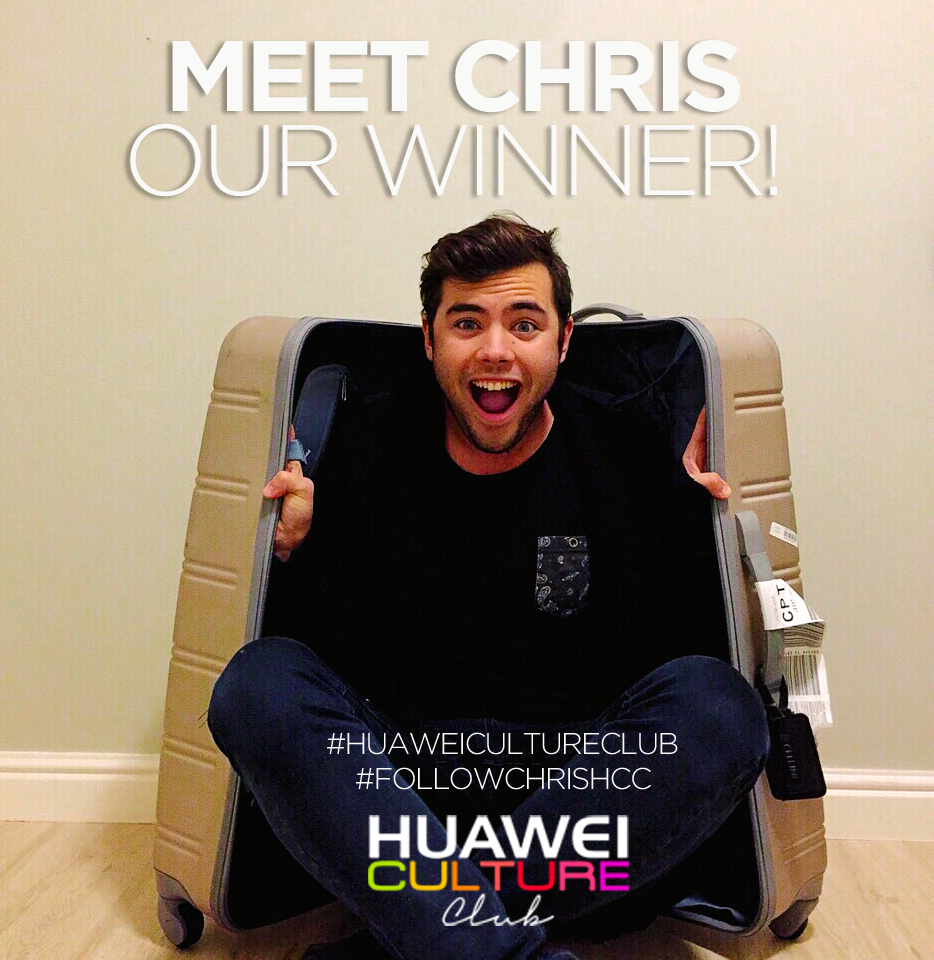 One incredibly happy Huawei fan’s music dream experience has just come true! Huawei and Huawei Culture Club are thrilled to announce that Chris Thomson from Cape Town is the winner of the “Make It Possible” competition.

This once-in-a-lifetime contest kicked off in March 2015 and included an all-expenses-paid trip for two to any music event anywhere in the world. To stand a chance of winning, entrants had to download and enter on the #HuaweiCultureClub app (available on Android or iOS), select their chosen music event and destination from anywhere in the world and – most importantly – get as many people to share and like their entry link across social media as possible. The person with the most shares and likes at the end of the two-month competition period is the winner.

And Chris is that person! With over 31,023 shares, likes, tweets and re-tweets, he beat out all other entries, and had almost 3,000 more likes and shares than the runner-up.

Says Chris: “Winning this competition was totally worth the few Facebook friends I lost from getting everyone to share and like my entry. Thank you Huawei and Huawei Culture Club!”

This is the biggest consumer competition Huawei has run in South Africa through its Huawei Culture Club platform, with the prize being valued at over R100,000. Huawei received over 4,600 entries with 96,000 shares, likes, tweets and re-tweets in total across all entries. To date, there have been over 15,000 downloads of the app. The total social media impressions or “opportunities to see” exceeded 32-million, a staggering achievement.

“Music forms a large part of Huawei’s strategy to engage with the South African consumer in a meaningful way,” says Yudi Rambaran from Huawei South Africa. “Through our Huawei Culture Club app and platform, we are giving consumers access to incredible music experiences they can’t get anywhere else. The ‘Make It Possible’ competition is a perfect example of this,” adds Yudi.

Chris and his travel companion will receive:

Where will Chris be going? He chose to head to Croatia Rocks!

But that’s not all! To reward the top three entries, including the winner, each will receive a brand new Huawei Mate 7 phablet – the 6-inch flagship device from Huawei with its unique fingerprint security and an extended battery capacity.

Stay close to Huawei SA on Facebook, Twitter and Instagram and #FollowChrisHCC for updates, videos and photos from his #MakeItPossible dream trip. With his new Huawei Mate 7, Chris will be taking some awesome shots.

Meet Chris. He’s very happy. Why? Chris is the winner of the #HuaweiCultureClub #MakeItPossible competition!…

Download the #HuaweiCultureClub app for more chances to be part of incredible music experiences:

We’re starting to feel the cold now, bbbbrrrrrrrr! Have you gotten all your winter goodies out yet?

About Huawei
Huawei is a leading global information and communications technology (ICT) solutions provider with the vision to enrich life through communication. Driven by customer-centric innovation and open partnerships, Huawei has established an end-to-end ICT solutions portfolio that gives our customers competitive advantages in telecom and enterprise networks, devices and cloud computing. Huawei’s 150,000 employees worldwide are committed to creating maximum value for telecom operators, enterprises and consumers. Our innovative ICT solutions, products and services have been deployed in over 170 countries and regions, serving more than one third of the world’s population. Founded in 1987, Huawei is a private company fully owned by its employees.

For regular updates on Huawei Consumer BG South Africa, follow us on:

About Huawei Culture Club
#HuaweiCultureClub is South Africa’s most epic smartphone app platform for all things music – and we’re coming to a party near you!

Be part of the growing community at the forefront of music SA and global culture – download the app for Android or iPhone to gain instant access to SA’s top music events and festivals like Rocking The Daisies, Ultra, Robin Shulz, One Republic and many more.