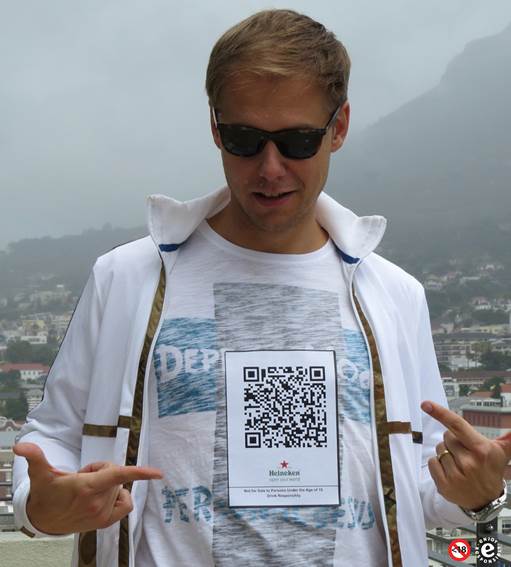 Excited for @ultrasa? Look out for the QR codes at Star Club, and send your own #UltraSA2015 message at the festival pic.twitter.com/fLq8UyR8hF

There’s no doubt that music is the biggest draw-card at Ultra South Africa. But what premium beer giant, and sponsor of the festival, Heineken® knows, is that men and women of the world also revel in the chance to meet like-minded souls, have unique experiences, and share them across social media platforms.

Heineken® created an innovative and entertaining way for festival goers to meet new people. They created a special place where fans could create and wear stickers, displaying their very own QR code, containing a hidden message of their choice. To read their message other festival-goers had to simply scan the code, which was a great conversation starter.

Even international superstar, Armin van Buuren, got in on the action and created a hidden message for South African fans: “Howzit South Africa, awesome to be back”.

Scanning the QR codes turned out to be a great excuse to approach new people, and became the talk of the festival.

Once their stickers were in place, fans were also given access to the 7 meter tall Heineken® Star Club viewing deck boasting the best view in the house – and a selfie moment not to be missed.

No surprise many of the top local and international acts performing at this year’s festival, found their way to the Heineken® Star Club after their sets – giving Heineken® fans unsurpassed access to the talent of the day.

“Our association with Ultra South Africa is a long and proud one, but this year we focused more heavily on the social aspect of the festival. Heineken® added a unique contribution to the festival experience and gave fans the opportunity to not only enjoy live music, but also to open their world and make new friends” says Tjeerd Veldhuis (Heineken® Marketing Manager).

Heineken® Open Your World
HEINEKEN® Not for Sale to Persons under the Age of 18. Enjoy Responsibly.