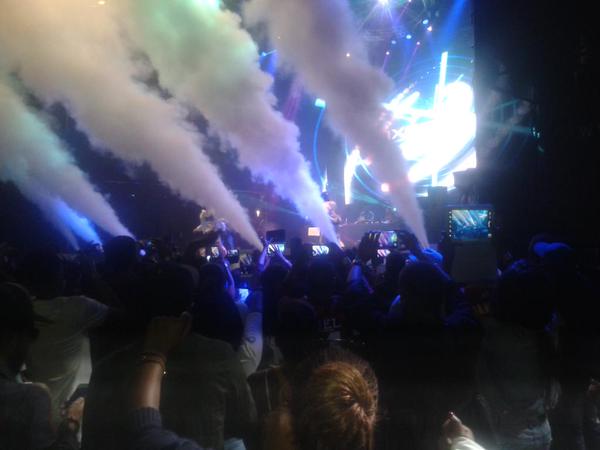 AxeCessJozi was back for its second year with an even bigger line-up than the previous year and if 2014 was anything to go by, 2015s event had all the right ingredients to be bigger and better.

The massive setup included a General Access, Golden Circle, VIP and VVIP area. You could also find the Sprite activation, as they allowed ticket holders to audition for their Hip Hop Search and another added bonus was Kid Ink’s official merchandise stand where you could also trade sneakers or purchase new ones.

The alcohol bar was in its own enclosed section, the toilets for General Access and Golden Ticket holders was at the entrance, whilst VVIP and VIP had their own toilet and bar. These proved to get rather messy as time went on and there was no water in the toilets around 9pm which was bad because the event was scheduled to end midnight.

There was a struggle to get in, I honestly don’t know what was going on because they only allowed ticket holders in after a certain time and not people who had tags on, which seemed confusing but people started pushing and shoving their way in.

The crowd embraced all 3 international acts with opening arms as they knew most the songs they performed. This was very impressive as not all the songs were released commercially but one had to have their album or mixtape to know the songs. A big plus for music, might I say. The local acts really put on a show, showing how far SA Hip Hop has come.

With last year’s AxeCessJozi, the acts came out with bands and dancers but we didn’t see the same for this year. The laptop and performer experience seemed to be the theme throughout but we were greeted with surprise performances by the likes Anathii, Nomuzi and Mike Will.

I rather enjoyed the visuals that were in the background and sides but I think it would have been better if people they had screened they streamed the performances on the side screens and various visuals and music videos on the screens behind the performers.

The first AxeCessJozi seems to have left a very high benchmark when it comes to the overall of performances but this year, the setup proved to be better than last years. A plus was all the freebies that the audience received from the international acts.