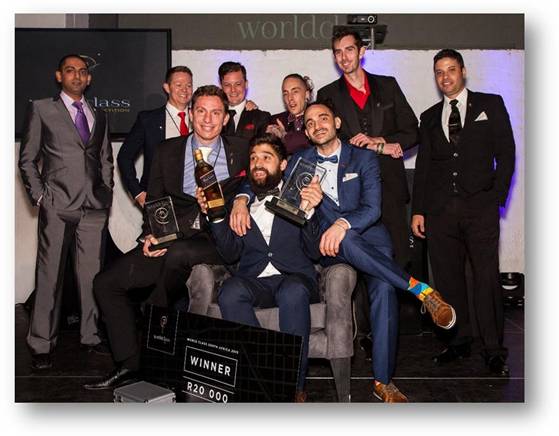 The scores are in and the decision is final: Dom De Lorenzo of the Molecular Bar is the best bartender in South Africa. De Lorenzo beat six of his peers from around the country in four themed challenges in the Diageo Reserve WORLD CLASS Bartender of the Year national finals, held in Johannesburg from July 14 to 16.

The culmination of 12 months of trials and challenges, the national finals were a gauntlet of skill and mental acuity pushing all contestants to their limit. In the end it was De Lorenzo who earned top marks overall – with leading scores in the “After Dark”, “Ketel One Market” and “Bartender Mastery” challenges. He was followed closely by runner-up Assaf Yechiel of Cape Town.

His fellow competitors still hold the distinction of being the best mixologists in their respective regions, a major accomplishment in itself. Assaf Yechiel, Steven Saunders, AJ Snetler, Tom Savage and Trace van der Merwe can all be proud of making it to the final.

Clinching the victory with his original creations the “Curious Case of the Malted Man” and “Lady in Red”, De Lorenzo will now go on to represent South Africa in the WORLD CLASS global finals in September. The event is being held in Johannesburg and Cape Town and will see the most talented bartenders from 57 countries go head to head for the world title.

“Winning the WORLD CLASS national finals is the pinnacle of my career as a bartender. I’ve worked hard towards this goal and it’s incredibly gratifying to be acknowledged in this way. I want to send a big shout out to all my fellow competitors: your talent is an inspiration to me. I’m looking forward to representing South Africa in the global finals, especially since I’ll have the home ground advantage,” said De Lorenzo.

Using the finest products from the Diageo Reserve portfolio of luxury brands – with a special focus on Ketel One Vodka; Tanqueray No Ten and Tanqueray London Dry gins; and the sophisticated flavours of Ron Zacapa Centenario, Johnnie Walker Blue Label and Johnnie Walker Gold Label Reserve – the finalists crafted a series of unique, awe-inspiring cocktails perfectly demonstrating mixology as an art form.

“At this level of mixology, the final decision comes down to the smallest of details – a subtle flavour note or a nanosecond of hesitation can make all the difference to the judges. All the contestants impressed across all categories, but there could be only one winner – this year, McClane is the best of the best,” said Masterchef SA judge and celebrity chef Pete Goffe-Wood.

In addition to claiming prize money of R20 000, De Lorenzo will now spend four days at a mixology boot camp in Turkey with other winners from around the world preparing for the WORLD CLASS global finals.

The Diageo Reserve WORLD CLASS Bartender of the Year competition, now in its seventh year, is the biggest and most prestigious mixology event in the world, providing a platform to celebrate the skill and craft of the world’s best bartenders, showcase fine-drinking experiences and inspire drinkers to embrace quality cocktail culture around the globe.

Over 20 000 bartenders have already being trained by the programme, representing more than 10 000 bars and restaurants. WORLD CLASS bartenders are synonymous with sophistication, impeccable service and pushing the boundaries of contemporary and experiential cocktail culture.