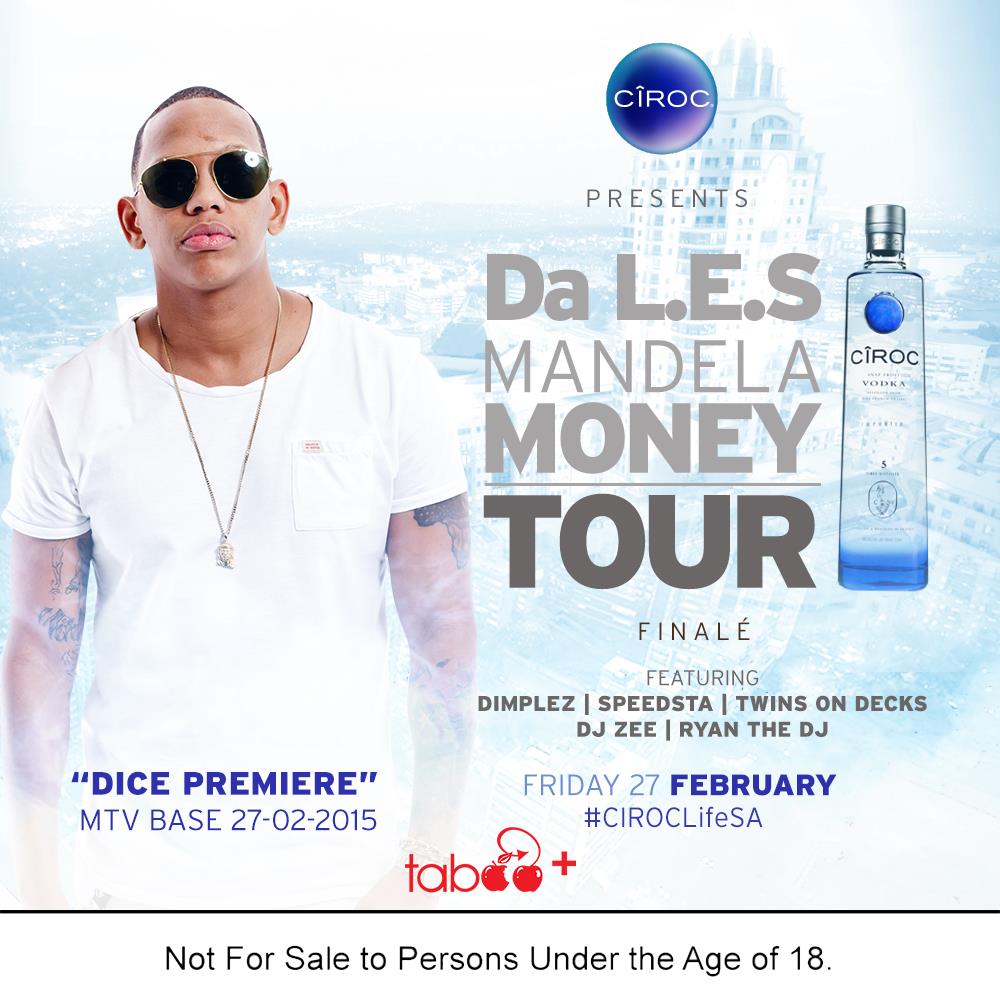 Da L.E.S set to take Jozi, and Africa, by storm

Following on the incredible success of his packed Cape Town and Durban performances, South African Hip Hop star, Da L.E.S, will end off his national Mandela Money Music Tour at Joburg’s Taboo on February 27, before taking his high-energy persona and style to the rest of the continent on his Africa-wide tour, presented by CÎROC.

On the same day, the exclusive premier of his new video for the track, Dice, will be aired on MTV Base, the third video off Mandela Money to be shot by renowned LA-based director Matt Alonzo.

Set in a mansion in the Hollywood Hills, California, the highly anticipated video, comes with all the VIP style and next-generation swagger Da L.E.S.’s fans have come to expect along with his signature, high-energy groove which fuses Afro beats with international hip hop sounds.

The album, Mandela Money, which features such smash hits as Fire, Heaven feat. AKA and Maggz, and the chart-topping Dice, has re-defined the standard of local Hip Hop and has been lauded as one of the finest African Hip Hop albums of the decade.
Also on the bill with Da L.E.S. at Taboo will be popular guest DJ’s and friends of Da L.E.S., notably DJ Dimplez.

“Connecting and sharing my passion with my fans in Cape Town and Durban has been incredible – I think the final leg in Joburg is really going to end off the entire experience with a bang! Mandela Money is an album like no other and I believe I’ve taken my sound to a whole new level. Performance-wise, I will be bringing all my energy to the stage in Jozi” says Da L.E.S.

Recognized as one of the continent’s most energetic and dynamic artists, Da L.E.S was recently announced as one of the CÎROC Circle – an elite collection of South Africa’s most prominent talents from across a comprehensive range of specialities.

About Brandhouse
Brandhouse Beverages (Pty) Ltd was formed on 1 July 2004 as a joint venture between Diageo, Heineken International and Namibia Breweries Ltd. It is South Africa’s leading premium drinks company with an unrivalled portfolio of brands across the spirits, beer and cider categories. These include Johnnie Walker, J&B, Smirnoff, Bell’s, Baileys, Jose Cuervo, Tanqueray, Captain Morgan, Amstel, Heineken, Windhoek, Foundry, and Guinness among others.
For more information about brandhouse, its people, and brands visit us at www.brandhouse.co.za.
Celebrating life, every day, everywhere, responsibly.