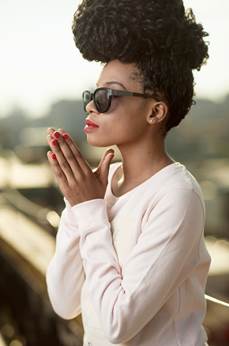 After the massive success of AKA’s single, titled ‘Baddest‘ featuring Khuli Chana, Burnaboy & Yanga, he has released a remix version with an all-female line-up. The remix features Rouge alongside the likes of Gigi Lamayne, Fifi Cooper and Nomuzi. This is the first for SA Hip Hop!

It’s not unusual to find our female rappers featuring local male rappers, we have come to see this on Rouge’s latest single ‘BUA‘ featuring Reason. The single has had incredible radio airplay nationwide, which reached 3 charts on YFM, the number 1 spot on Hot 99 Hip Hop chart, number 7 on the Bomb Chart as well as number 7 on their Top 40.

Earlier this year she received endorsements from both Cassper Nyovest and AKA through their social media accounts. Cassper Nyovest saying “Rouge is the best female rapper in the country“!! and AKA tweeting “She definitely has something special about her“. Neither of these artists have publicly endorsed any other female rappers before, especially AKA, until the release of his latest single ‘BADDEST- REMIX‘

Rouge has definitely shown that 2015 is the year of the female and that her crown as ‘The Queen of Rap‘ is definitely fitting.